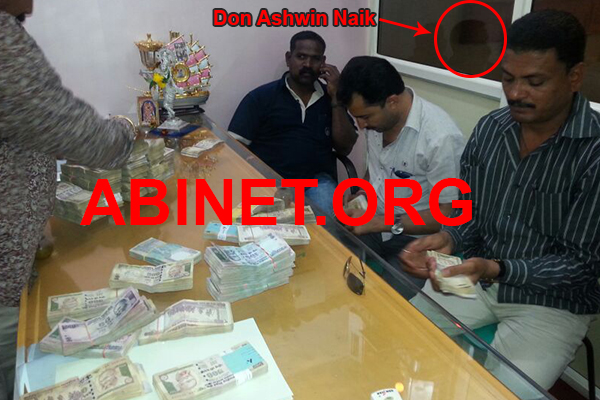 Speaking to ABI (Akela Bureau of Investigation) Laxami Narayan confirmed that an enquiry has been initiated in the matter. “Matter is serious in nature. I have ordered an enquiry after ABI (abinet.org) published the news,” said Laxami Narayan.

They counted the notes sitting at Don’s office and handed over Rs. 35 lakhs to him as gift and got themselves clicked pictures with Ashwin.

ABI (Akela Bureau of Investigation) is in possession of these pictures proving their relations.

Constable Janardan Sanap, who is incharge of passport verification and “Secret Department” at Kolsewadi Police Station is also under the police scanner for having close links with Shyam Shelke. Sanap extorts Rs. 1,000-2,000 on per passport verification. In emergency cases, the figure goes up to Rs.10, 000. On occasions such as weddings, birthday parties, and Ganapati and Durga poojas, he extorts Rs. 1,000-5,000 to allow the usage of loudspeaker. He never issues receipts to applicants.

There is a possibility that these policemen, builders, Shelke and the ration shop licensee are extorting money on Ashwin Naik’s behalf.