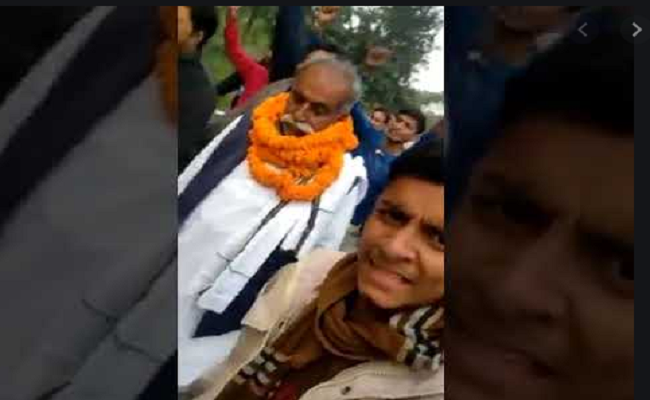 NOW is an excellent time to ask “aur kitne acche din chahiye” in Bihar in Sushasan Babu Nitish Kumar’s State Bihar. A murder accused is roaming free in the market area wearing a Pushp Mala shouting slogan Zindabad, Zindabad. He is wanted by police for murdering an advocate.

ABI is in a possession of a video recording wherein a person, Shilanath Singh is roaming carefree on the road. He is wearing a Pushp Mala and campaigning for an election. Shilanath Singh is the main accused in the murder of lawyer Ramendra Kumar Sharma. See the video.

On July 13, 2017, around 10.30 am Ramendra Sharma (55) was shot dead in Garkha in Saran District, Bihar. The four assailants came on two motorbikes, intercepted Sharma and pumped five bullets into him, killing him instantly. Sharma was a practicing lawyer of Chhapra civil court. He was on his way to Court from his Residence in Garkha, around 8km from the Chhapra district headquarter.

Sharma, in a surprising turn of events, has also applied for police protection, with an apprehension that Shilanath Singh has planned to kill him as well but police ignored his plea.

ABI contacted Superintendent of police Harikishore Rai for his take comment on the issue several times. But despite trying to contact him multiple times, he has not responded to this reporter’s text messages at the time of this article going to the press.

Messages to DGP Gupteshwar Pandey also failed to evoke a response. In an interesting anecdote, it must be said that at the time of his appointment as DGP, Gupteshwar Pandey had released a message on Social Media. He had stated that general public must approach him, if there is any information of crime, so that he could take action on the same. At that time, CM of the State had rebuked Gupteshwar Pandey, that the focus of police should be on solving actual crimes instead of doing such shenanigans on Social Media.

However, it seems that even that video uploaded by the DGP was just a sham, and an exercise for image building, because clearly he does not believe in his own message.