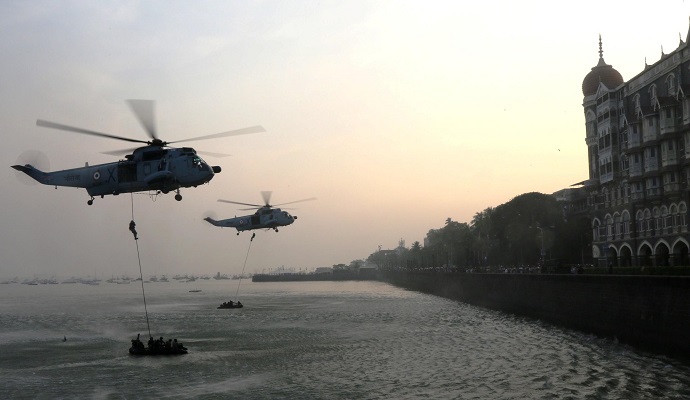 THE Indian Navy observes December 4 as ‘Navy Day’ to commemorate the glorious victory of the Indian Navy during Indo – Pakistan war 1971 and to salute the valiant heroes who bought the country this moment of pride. Executing ‘Operation Trident’ to perfection on the night of 3/4 December, the Indian Navy launched an attack on the Pakistani port of Karachi. Operation Trident saw the first use of anti – ship missiles resulting in sinking of three Pakistani vessels and setting ablaze of the Karachi oil refinery.

A signature event of the Navy Day celebrations is the impressive Beating Retreat and Tattoo ceremony performed at the Gateway of India by the Indian Naval band. The picturesque venue was decked up on the evening of 04 December where the Naval band regaled a select audience. Other highlights included a Sailors’ Horn Pipe dance by children of the Sea Cadet Corps, Continuity drill by Naval personnel, Rescue and Marine Commando demonstration and a flypast by Naval helicopters based at Naval Air Station, INS Shikra. The event was witnessed by the Chennamaneni Vidyasagar Rao, Honourable Governor of Maharashtra, as the Chief Guest and other luminaries.

The ceremony of ‘Beating Retreat’ has its origin in the early warfare. It was sounded everyday as a signal to the troops to disengage from combat as daylight faded, ordering them to withdraw to the confines of their encampment for the night. Since then, the ceremony of ‘Beating Retreat’ has become an integral part of the military traditions of India. The custom of ‘Tattoo Ceremony’ post retreat encompasses beating the drums within the billeting, ordering the troops to proceed to their quarters.

The Continuity drill performance by the ‘Nauveers’ of Western Naval Command was spectacular and mesmerising, as the entire drill sequence was executed without a single word of command. The purpose of performing drill in immaculate turnout in the military, is to inculcate essential qualities of endurance, uniformity, military bearing, pride in one self, implicit obedience of orders and above all, to instill unity of purpose and espirit-de-corps. The young girls of Sea Cadet Corps, hailing from all parts of Mumbai, put up a captivating display of the Horn Pipe dance.

The Naval aviators with their flying machines showcased scintillating performances. The special heliborne operations were undertaken by Commando version of Seaking displaying speed, surprise and stealth. The Chetak helicopter demonstrated Rescue Operations and the air display concluded with a spell-binding Fly past at dusk by all helicopters including the Kamov 31, which is capable of Airborne Early Warning and Anti – Submarine version of the Seaking.

During the Marine Commando Ops demo, the spirit and courage of marine commandos were displayed which they have exercised over the years viz. hooked and slung from the rope exhibiting physical strength and never-say-die attitude.