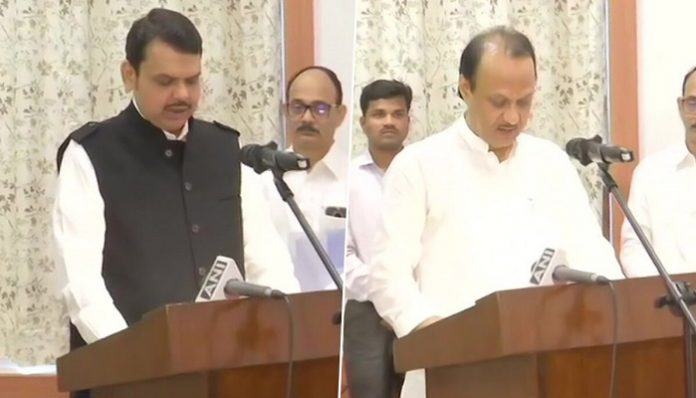 DEVENDRA Fadnavis was sworn in on Saturday morning as the chief minister of Maharashtra: a stunning development that came as the nation expected an alliance excluding the BJP to claim the right to form a government.

What’s more, the man taking oath as deputy chief minister was Ajit Pawar, a member of the Nationalist Congress Party (NCP), one of the three parties working to create the alternative alliance.

Minutes after Fadnavis and Pawar were sworn in, Prime Minister Narendra Modi congratulated them and said he was “confident they will work diligently for the bright future of Maharashtra”.

President’s Rule, which was imposed in Maharashtra on November 12, has been revoked.

Ajit Pawar is the nephew of NCP president Sharad Pawar, who only yesterday said all three members of a new prospective governing alliance — between the NCP, the Shiv Sena and the Congress — wanted Sena chief Uddhav Thackeray in the chief minister’s job.

Ajit Pawar said he reached his decision to join hands with the BJP on his own.

Sources quoted by ANI, meanwhile, said Sharad Pawar was a part of discussions for a Fadnavis-led government, and that he gave his assent to Ajit. The sources said no decision is taken by the NCP without Sharad Pawar’s assent.

Sources say Ajit Pawar has the support of as many as 22 NCP MLAs (out of a total of 54); a few leaders and MLAs from the Shiv Sena are also said to be in touch.

Devendra Fadnavis, on his part, said Maharashtra needed a stable government, and not a “khichdi” administration.

To get an idea of just how unexpected all of this is, take a look at what senior Congressman Abhishek Manu Singhvi tweeted. He thought the news was fake.

In the October state election, the BJP was the single largest party, with 105 seats. Its former ally Shiv Sena won 56. The NCP was third with 54, and the Congress fourth with 44.

The BJP and NCP’s combined tally takes them well past halfway mark in the 289-member assembly, which has one nominated MLA.