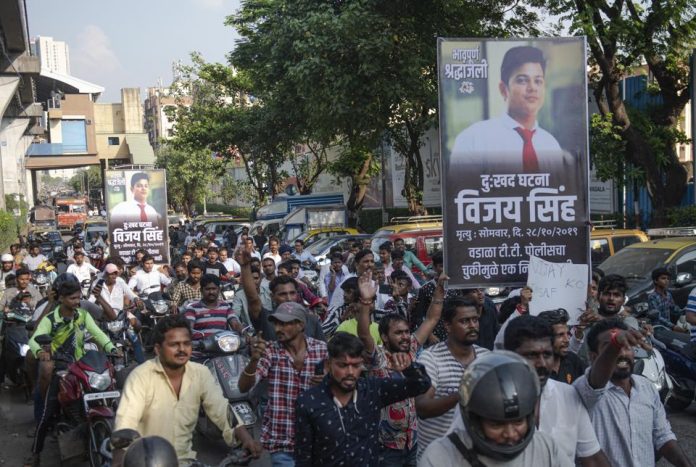 ARRESTED after getting into a fight with a couple, the Sion resident was beaten up by policemen and died before he could be admitted to hospital, his family claims.

Five policemen, including two officers, were suspended on Tuesday after an inquiry into the custodial death of a 26-year-old man at the Wadala Truck Terminus police station on the intervening night of Sunday and Monday. Vijay Hridaynarayan Singh, who was allegedly thrashed by the policemen, complained of chest pain and died before he could be admitted to Sion hospital. A medical representative with a pharmaceutical firm, he lived in Sion. The five suspended policemen are assistant police inspector Salim Khan, subinspector Sandip Kadam, head constable Bhabal, constable Chaule, and police naik Chaure. The post-mortem report is awaited and the case has been handed over the Mumbai Crime Branch for further investigation, the police said.

According to the police, the Mobile -1 team that was on crime-prevention patrol had intervened in a fight between Singh and a couple at 11.35 pm on Sunday. The fight broke out near the MMRDA ground at Antop Hill when Singh and two of his friends arrived at the spot on a bike. The two-wheeler’s headlight briefly shone on the couple that was seated there, leading to a verbal altercation that deteriorated into a scuffle. The couple allegedly assaulted Singh in the presence of the police team, according to his family and his friend Ankit Mishra, who was with him at the time.

The mobile patrol team took the five – Singh, his two companions, and the couple – to the police station. Based on a complaint by the couple, the police registered a non-cognisable complaint of voluntarily causing injury and criminal intimidation. This is when, police sources claimed, Singh began complaining of chest pain.

Singh’s relatives claimed, however, that he was thrashed by members of the mobile police team while being taken to the police station. They also said that personnel at the police station had not provided him water when he asked for it, and asked them to arrange for a private cab to take him to the hospital when he complained of chest pain. By the time he was taken to the hospital, Singh’s condition had deteriorated considerably, they alleged.
DCP (Operations) Pranay Ashok said, “Singh was taken to Sion hospital, where he was declared dead before admission at 2.45 am on Monday.”

Under NHRC guidelines, and the rules governing custodial deaths, the case was handed over to the crime branch, which will look into allegations by Singh’s family about the conduct of the policemen, DCP Ashok added.
He said, “All the complaints against the police personnel will be looked into by the crime branch and we will have to wait for it to end to arrive at conclusions.” Singh’s relatives, friends and neighbours on Tuesday held protests outside the police station, demanding justice for him and stringent action against the police officials. They were dispersed by the police later in the evening.

Late in the night, based on a complaint from Singh’s friend, the Wadala police registered a case against the couple on charges including those related to causing hurt, wrongful restraint and intentional insult. The police accused the duo of giving fake information to them.