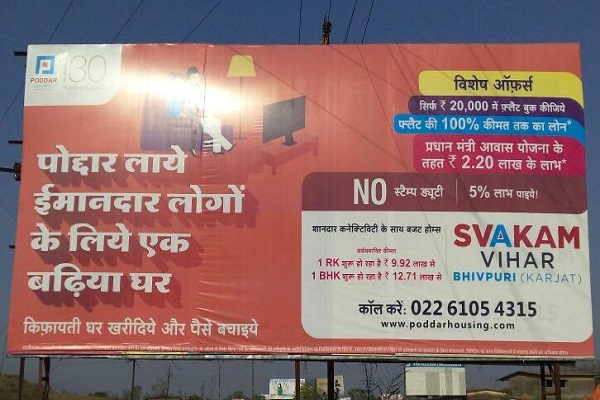 HOARDINGS are generally placed along highways, busy roads and crucial locations to ensure that people see your advertisement without fail. These days a hoarding on a highway in Karjat, Raigad district, has become the centre of attention. Poddar builder has placed the advertisement that claims he is constructing homes for honest people only.

Remember, Poddar builder is nowadays mentioned as the most controversial builder in Mumbai, Thane and Raigad districts. There are FIRs of cheating and forgery registered against Poddar firms. And yet, Poddar placed the advertisement hoarding on the Karjat highway in Raigad district claiming that the builder is constructing homes for honest people: PODDAR LAYE IMANDAR LOGON KE LIYE EK BADHIYA GHAR. This offer is for Svakam Vihar project, on the Central line, just off the Kalyan- Karjat Highway, Bhivpuri, Karjat.

Currently the Samruddhi complex project in Garpoli village, Karjat, district Raigad, is enveloped in controversy. An FIR has been registered against Poddar owners under MOFA and for cheating. General Manager of Jinendra Nahar has been arrested and is in jail. The big question is will the current chairman of Poddar Housing Ltd Rohitashwa Poddar have to face arrest if the case is taken to its logical conclusion. It is not only the Karjat project, but the Badlapur and Kalyan projects also are surrounded by controversies.

“The biggest fraud with Poddar builder is that after they take the first amount they will make you cry. Anyone planning to buy an apartment at Swakam Vihar project must be careful,” said Rameshwar Kute, a resident of Samruddhi project.

On June 10, 2016, ABI reported under the headline “Builder purchases land worth Rs 500 crore for only Rs 15 crore, with generous help from police and Kalyan tehsildar”.

On November 4, 2016, ABI reported under the headline “FIR against Poddar builder for cheating buyers, but police in Karjat not interested in going beyond paperwork”.

On November 22, 2016, ABI reported a third matter under the headline “Poddar builder steals water from dam and sells it at high price to residential complex”.

After all this, it should be clear that Poddar builder is an expert in misguiding and cheating flat buyers by hiding important facts and placing attractive advertisements.