Home Others Front line warships will be open to public 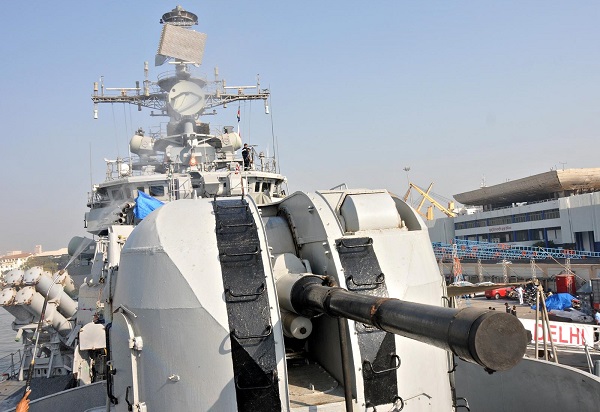 AN eagerly awaited event of the Navy Day celebrations, Indian Naval Ships (INS) Delhi and Tabar will be ‘Open to Public’ between 10:00 AM to 03:00 PM, over the weekend, on 26 and 27 November 2016. Entry to the ships will be provided to one and all Indian Nationals from the Tiger Gate near Ballard Estate, Fort for a guided tour of the ships. During the event large crowds throng the dockyard every year for glimpse of their warships. For security reasons, visitors are advised not to bring mobile phones with camera, cameras, bags or baggage.

The ships will be open to School Children today on 25 November 2016 where children accompanied by teachers will be taken on guided tour of the ship. Schools have been advised to get the children in groups of 20 students accompanied by two teachers.

Larger of the two ships open to public, INS Delhi, is the first ship of the 6,700 tons indigenous guided missile destroyers designed and built at Mazagaon Docks Limited, Mumbai. Commissioned in the golden jubilee year of India’s Independence (1997), she is a floating testimony to the high level of technological advancement, ship design and building capabilities achieved by India over the years. INS Delhi is a multi-purpose command and control platform capable of operatingindependently in a multi-threat environment. The ship is powered by four Gas Turbine engines and has a top speed in excess of 30 knots. Her formidable arsenal comprises Surface to Surface missiles, Surface to Air Missiles, 100 & 30 mm Guns, Torpedoes, Anti-Submarine Rockets and Chaff decoys. Her sensors include two long range surveillance radars, advanced Electronics warfare suite and indigenously developed sonar integrated into a composite network. She is capable of carryingtwo Sea King helicopters, capable of both anti-Submarine as well as anti-surface operations.

INS Delhi has been at the forefront of all operational deployments and participated in all major tactical exercise, as well as regularly exercised with foreign navies like USA, Russia, UK, France, Japan, South Africa, Brazil, Singapore and Oman. The Ship has a crew of 35 Officers and 350 Sailors.

INS Tabar is the latest of the three Talwar class Stealth Frigates. The ship is one of the front line combatants of the Western Fleet of the Indian Navy.

The ship’s ‘Coat of Arms’ embodies two Battle Axes or ‘Tabars’ crossed against backdrop of waves of the ocean. Her motto ‘Guts and Glory’ exemplifies the essence of the spirit of the men who proudly man her and will make history. The Officers and Men of Tabar derive strength and courage from ‘Cult of the Axes’ which pierces the mist of time.