Home Legal ‘I am not even Muslim’: Meet the student who has become the... 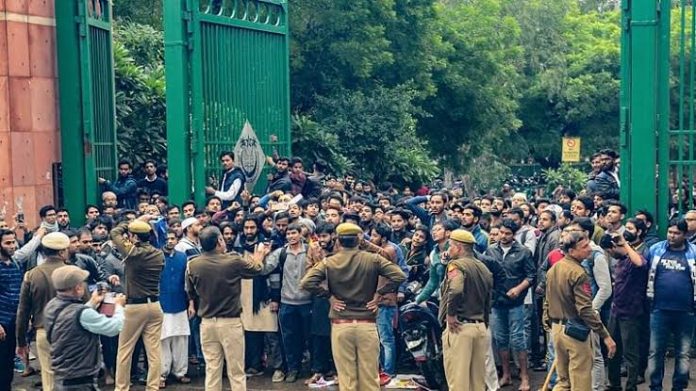 AS many as 50 detained students of Jamia Millia Islamia were released early Monday even as the situation in the University remained tense after violent protests over the amended Citizenship Act. On Monday morning, a woman student told a leading news channel that she doesn’t feel safe in the entire country.

A woman student from Jamia Millia Islamia University told the NDTV, “We thought Delhi is the safest place for students, and this is a central university. I thought the university is the safest place, nothing can happen to us. We cried all night. What is happening.” She further added that “I don’t feel safe in this entire country. I don’t know where I will go and get lynched. I don’t know if tomorrow my friends will be Indians. I am not even Muslim. I’m still at the frontline from Day 1. Why? Because of what has happened to my family… What use is our education if we cannot stand by what is right.”

Several parts of India have been witnessing violent protests ever since the Citizenship (Amendment) Bill was passed in the Parliament last week. The Bill, which has now become an Act after getting the President’s nod, will provide Indian nationality to Hindus, Christians, Sikhs, Parsis, Jains, and Buddhists fleeing persecution in Pakistan, Afghanistan, and Bangladesh.

“I am not even Muslim. I’m still at the frontline from Day 1. Why? Because of what has happened to my family… What use is our education if we cannot stand by what is right,” the woman student told NDTV.

Many students feel they are not safe even inside the campus. The varsity had declared winter vacation from Saturday till January 5 and even postponed the exams.

Protesters on Sunday had torched four public buses and two police vehicles as they clashed with the police in New Friends Colony, near Jamia Millia Islamia, leaving nearly 60 people including students, cops and firefighters injured. Police used batons and teargas shells to disperse the violent mob but denied firing at them. Following the arson on roads, police entered the Jamia university campus.

A Jamia students’ body claimed they had nothing to do with the arson and “certain elements” had joined the during the protest and “disrupted” it. They also accused the police of high-handedness.