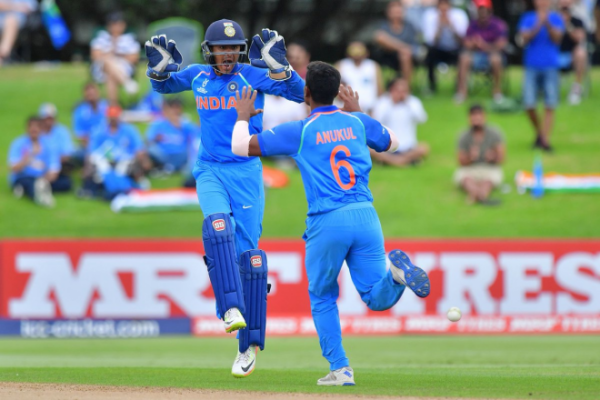 Prithvi Shaw’s India thrashed Australia by 8 wickets in the ICC Under 19 World Cup final on Saturday afternoon. In what was the repeat of 2012 edition, Men in Blue defeated the three-time champions at Bay Oval. India who were playing in their record sixth final have won the title for the record-fourth time, earlier being 2000, 2008 and 2012. India rode on a disciplined bowling effort to restrict Australia to a meagre 216. The man of the match was Manjot Kalra who played a crucial inning of 101 runs to lead the team to victory. Although the two most talked players Prithvi Shaw and Shubman Gill failed to have an impact on the game, Kalra led from the front to play a more responsible inning.

Electing to bat first after winning the toss, the Australians lost their top three batsmen with just 59 runs on the board, thanks to pacer Ishan Porel’s twin strikes early on. Porel’s victims included openers Max Bryant and Jack Edwards before Kamlesh Nagarkoti joined the party by removing skipper Jason Sangha for an unlucky 13 off 24 balls.

Thereafter, Merlo and Param Uppal steadied the team with a 75-run fourth wicket stand which saw them going past the 100-run mark, before left-arm spinner Anukul Roy ended Uppal’s 58-ball stay with a brilliant catch in his own follow through. Tottering at 134 for four, Merlo was joined in by Nathan McSweeney (23), who added 49 runs for the fifth wicket before meeting the same fate as Uppal, this time caught and bowled by the other spinner, Shiva Singh.

Ishan Porel, Kamlesh Nagarkoti, Shiva Singh and Anukul Roy took two wickets each while Shivam Mavi grabbed one. Harvik Desai finished the match in style- with a boundary. The future stars of Indian cricket have announced themselves to the world and that too in style.