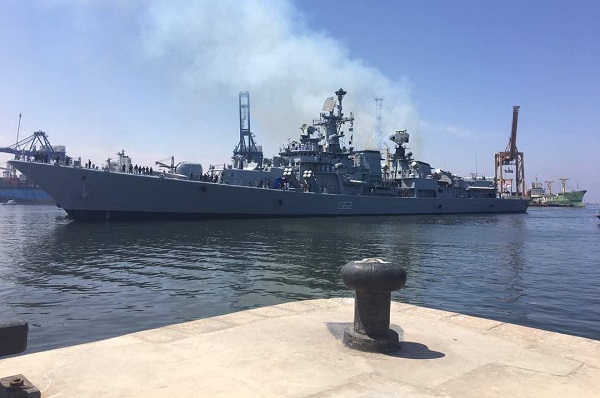 AS part of the Indian Navy’s overseas deployment (OSD) to the Mediterranean Sea and the West Coast of Africa, two Indian warships, INS Mumbai and INS Aditya, arrived at Alexandria on May 5, 2017 for a three-day visit. The warships will engage extensively with the Egyptian Navy during their stay in harbour. Apart from professional interactions, a number of sports and social engagements are also planned, which would go a long way in enhancing co-operation and understanding between these two important and capable navies.

India and Egypt are two of the world’s most ancient civilizations with a rich history of close contact. Building upon the rich and longstanding relations that have existed between India and Egypt, both nations have developed warm relations in several spheres. Training co-operation between the two militaries exist at the highest levels. One such significant milestone in defence cooperation was the training of Egyptian pilots by Indian Air Force pilots and the joint venture to manufacture the famous Helwan 300 fighter jet. The setting up of the Indo-Egypt Joint Defence Committee (JDC) in 2006 was another significant step in strengthening the relations between the two nations. A number of such bilateral agreements for defence co-operation and cultural exchanges exist between the two nations, many of which were signed during the Presidential visit to India in 2013. Trade between India and Egypt remains vibrant with many Indian corporate houses having strong interests in Egypt.

With governments of both countries keen on sustaining strong diplomatic ties, the current visit seeks to underscore India’s peaceful presence and solidarity with friendly countries and, in particular, to strengthen the existing bonds of friendship between India and Egypt.

Indian Naval assets have been increasingly deployed in recent times to address the main maritime concerns of the region, including piracy off the coast of Somalia. In addition, the Indian Navy has also been involved in assisting countries in the Indian Ocean Region with Hydrographic Survey, Search and Rescue and other such capacity-building and capability-enhancement activities. The current deployment into the Mediterranean will contribute towards the Indian Navy’s efforts to consolidate Inter Operability and forge strong bonds of friendship across the seas.

Over the last few decades India has made substantial advances in terms of designing and building warships indigenously and the visiting ships bear testimony to these capabilities. INS Mumbai and Aditya have been designed by the design bureau of the Indian Navy and constructed at Indian shipyards, namely, the Mazagon Dockyard Limited (in Mumbai), and, the Garden Reach Ship Builders and Engineers Limited (in Kolkata). The destroyer Mumbai is equipped with state-of-the-art weapons and sensors.

The visiting ships are part of the Indian Navy’s Western Naval Command and are based in Mumbai. The Task Group is headed by Rear Admiral RB Pandit, the Flag Officer Commanding Western Fleet, who is flying his flag on the guided missile destroyer, INS Mumbai.