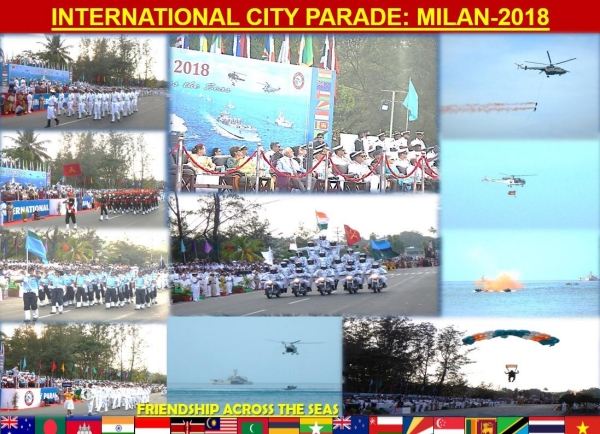 THE stunning settings at the Marina Park was the venue for a glorious International City Parade on March 9, 2018.

The City Parade showcased the motto of MILAN ‘Friendship Across the Seas’ in great style as school children, Marine Commandos, Para Jumpers, marching contingents and cultural troops stole the hearts of  the spectators. The events unfolded with the backdrop of the historic Ross Island against the pristine blue waters of the Andaman Sea. Marine Commandos of the Indian Navy demonstrated a small team insertion and extraction technique as they launched an attack on a dummy oil rig. This was followed by a Search and Rescue demonstration by Chetak helicopters of the Indian Navy & the Coast Guard, instilling confidence amongst the spectators about the HADR capabilities of the Armed Forces. The daring display by motorcyclists from the Indian Army left the audience enthralled. The Marine Commandos of the Indian Navy jumped from a Dornier aircraft for a combat free fall to exhibit sky diving skills. Admiral DK Joshi, PVSM, AVSM, YSM, VSM, NM (Retd), Hon’ble Lieutenant Governor, Andaman & Nicobar reviewed the parade as smartly turned out contingents of all four components, marched to the tunes of military bands. Ceremonial bands of the Army, Navy, Andaman & Nicobar Police enthralled the audience with martial music.

The colourful tableaus from Andaman & Nicobar Command, Forest Department and Directorate of Shipping Services as also the cultural folk dances added colour to the event. The 15 Assam Regiment closed out the cultural extravaganza with an ebullient Manipuri dance. The Continuity Drill of the Indian Navy and the precise manoeuvres of Air warrior Drill Team, drew applause from the huge gathering with their split second precision. As the setting sun streaked the twilight sky.

The Indian Naval Band performed, the last tune before the ‘Retreat’, while the National Flag was being lowered. The fireworks and the synchronized illumination of the Naval ships at anchorage was a sight to cherish for a long time to come.