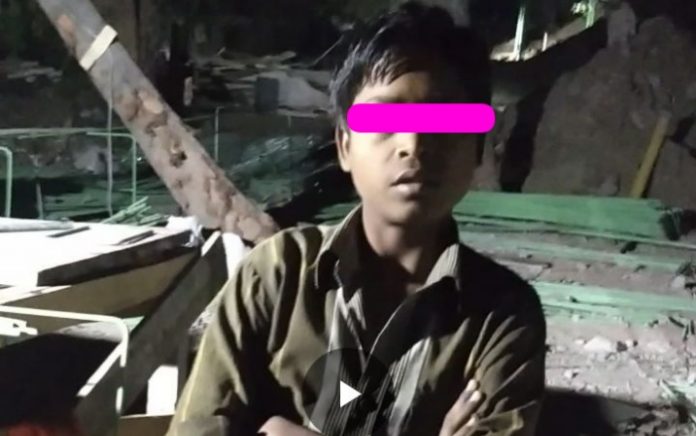 AN alert citizen spotted a juvenile labourer employed and working on a construction site of Indian Navy at NCH Colony in Kanjur Marg (West). On enquiring, the Juvenile was below 13 years of age.

According to the alert citizen (who is a resident of NCH Colony), he was taking a walk in the colony around 11 PM in the evening after his dinner, on 2nd April 2018. When he passed through building no 54, near Joggers Park, he heard and saw noisy construction work going on. He was surprised as it was 11.00 in the night and the construction activity was very noisy. He also witnessed a labour working at the site who seemed like child, and hence out of concern, he went to the child and asked him his age. The child informed him that his age was 12.5 years. On being questioned further, the child also told him that he was working on the site since 8.00 AM in the Morning. The child further said that the contractor was very strict and made them do back breaking and tedious work all day long and was not also paying them properly and timely. The child was working even though he was suffering from heavy fever.

Military Engineering Services (MES) (one of the oldest and largest government defence infrastructure development agency in India) is constructing three high rise buildings for coast guard inside the NCH Colony. Captain Rahul is in charge of the project. There are a lot of alleged violations in this project. The project also does not have the required NOC of MPCB. The construction work is going on in full swing on 24X7 basis.

The alert citizen immediately informed and complained to the Security Incharge of the Colony, Awasthi and Commandar MHA Mujawar. He specifically complained that the minor was being employed on the construction site, doing a back-breaking job of labour. The complaint was done through telephonic call and WhatsApp. Commander Mujhawar replied that he will look into the matter as well as conduct a surprise check, but so far, no action has been taken against the errant contractor.

When Security Incharge of NCH Colony, Awasthi was contacted, he replied that this is happening because of nexus between Administrative Officer Commander Mujawar and a Worker Birendra Singh appointed as Project Incharge . It is under their watch that these irregularities are going on.

ABI’s Journalist tried to inform about this violation of a child’s constitutional right to higher authorities in the Navy, through Twitter. Shockingly, the Navy, instead of taking action on this issue, blocked the journalist so that they would not have to handle this complaint.

In this back and forth, sadly no one seems to be worried about the health repurcussions of the child being employed as labour, as well as his constitutional rights which are being blatantly violated.

According to the International Labour Organisation, India tops the list when it comes to the number of children still living and working in bonded labour and slave conditions with China coming a distant second.