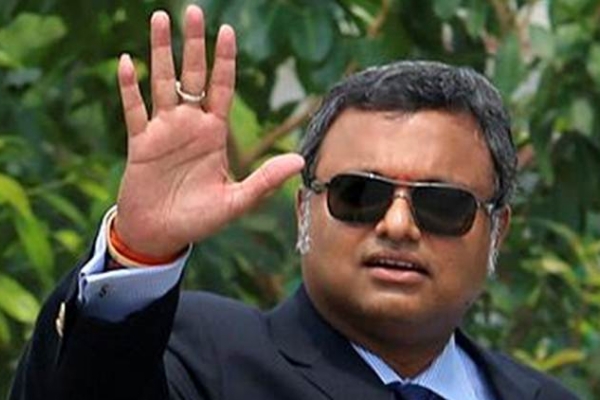 Karti Chidambaram, son of former Union minister P Chidambaram, has been arrested by the CBI in the INX Media money laundering case. CBI officers were interrogating Karti at the Chennai airport after he landed from London. CBI CBI officials said that Karti was arrested for not cooperating with investigations. He will now be brought to Delhi.

Karti’s name had cropped up in the case which relates to Foreign Investment Promotion Board (FIPB) approval granted in 2007 for receipt of funds by INX Media when his father and senior Congress leader P Chidambaram was the Union finance minister during the previous UPA regime.

The Enforcement Directorate had alleged that INX Media had deliberately and in violation of the conditions of the approval made a downstream investment of 26 per cent in the capital of INX News Pvt Ltd without specific approval of FIPB, which included indirect foreign investment by some foreign investors, and generated Rs 305 crore foreign direct investment in INX Media Pvt Ltd against the approved foreign inflow of Rs 4.62 crore.

P Chidambaram said the allegations in the CBI’s FIR against Karti in the INX Media case were “totally imaginary, farfetched and highly improbable.” The petition added that “even on a bare reading of the FIR, it would be clear that the petitioner’s son has been deliberately drawn into a small, routine commercial transaction between two private companies for a paltry sum of Rs 10 lakh…”

Last week, he approached the Supreme Court alleging violation of his fundamental rights by the NDA government, which he claimed is misusing agencies such as the CBI and the Enforcement Directorate (ED) to harass him and his family members.

“The grievance of the petitioner is that the Central government, misusing its agencies, has violated the petitioner’s fundamental rights under Articles 14, 19 and 21 of the Constitution,” Chidambaram said in his plea before the apex court. The plea urges the court to issue directions to stop these agencies from “continued harassment of the petitioner and members of his family, including his son”.

Reacting to Karti’s arrest, the Congress party said it will not be deterred. “This is a classic diversionary tactic by the Narendra Modi government. The PM continues to remain mum on the Nirav Modi case. We won’t be deterred, we will continue to speak the truth and hold the government accountable,” party spokesperson Randeep Surjewala said.