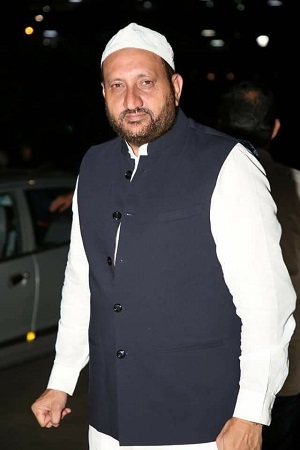 PEER Makhdum Saheb Charitable Trust, famously knows as Mahim Dargah, located at Mahim, Mumbai, is in news, but this time, for an ignoble and horrific reason. One of the Dargah’s trustee, Dr Mudassir Nisar Lambe, has been accused of rape by one Tabassum Khan (name changed to protect identity of the victim).

Tabassum Khan, 33, is a leader of Shiv Sena, associated with Shiv Vahtuk Sena. Tabassum Khan has alleged that Mudassir Lambe raped her thrice, under false pretext and promise of performing Nikaah with her, but later, Lambe reneged on his promise to marry her.

Lambe, however, is well prepared for any rape complaints and legal process against him. He is qualified, and holds MBBS, DHMS and CCH degree and also claims to have a HIV positive certificate, purportedly to help him in such legal battles and rape accusations against him.

Tabassum Khan has filed a written complaint to several police authorities as well as Maharastra State’s Women Commission on December 7, 2020, seeking action against Mudassir Lambe. A copy of the said complaint is available with ABI.

Lambe is a resident of 101, Rizvi Mansion, LJ Road, Mahim, and is a dealer of Hindustan Petroleum. He is also a member of the Wakf Board.

According to the complaint, Lambe and Tabassum first time met each other at a Muslim Seva Sangh program on January 11, 2020 at Vashi, Navi Mumbai. Since then Lambe started messaging and calling Tabassum every day. He introduced himself as a very successful businessman, doctor, trustee of Mahim dargah and member of Wakf board. He also claimed to be a distant relative of notorious gangster Dawood Ibrahim and Sohail Khandwani. Despite Tabassum being already married, Lambe proposed to her for marriage. Lambe claimed that his present (third) wife is not able to satisfy him sexually. On January 28, 2020 Tabassum had gone for a treatment at Dr Lambe’s clinic where he gave an injection to Tabassum. She was in a semi-conscious stage when Lambe first raped Tabassum. Lambe assured Tabassum to not worry and promised that he will marry her at Bengaluru. After that Lambe raped Tabassum two more times, shockingly, once in Mahim Dargah’s office and once in car. Tabassum repeatedly requested Lambe to perform the Nikaah ceremony but Lambe refused the same saying- “tum jaisi auratein to maza lene ke liye hoti hain. Main jis-jis aurat ke saath sex karta hoon kya sabse Nikaah karta chalun.” Lambe offered a meagre amount of money to Tabassum and asked her to keep mum.

When Tabassum threatened that she will approach the police and courts, Lambe laughed at her and showed her a HIV positive certificate, and said that he will use the certificate to show that since he is an HIV positive patient, he cannot marry her. “Lambe ne mujhse kaha ki Mahim police ki aukaat nahin hai ki wo mere khilaaf FIR le. Mahim police to uske boss Sohail Khandwani ke tukdon par palti hai. Main agar police complaint karungi to wo mujhe call girl sabit kar dega,” said Tabassum.

“I have complained. I will approach the court soon. I have sufficient documents to prove that Lambe raped me on pretext of marriage. Lambe should marry me,” Tabassum added.

Do u know is it true or false

[…] woman. Consequently, a case has been registered against him by the Mahim Police. According to some reports, the victim is a Shiv Sena leader while others identify her only as a social […]