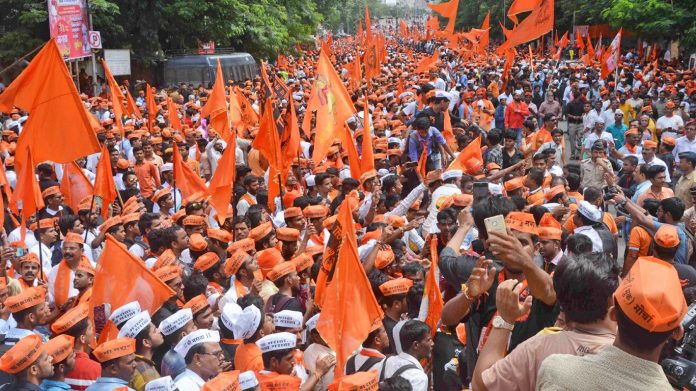 AFTER taking oath as Maharashtra Chief Minister, Uddhav Thackeray seems to be at the forefront in taking decision-related to the state and its people.

Uddhav Thackeray-led Maha Vikas Aghadi government has recommended the smaller courts to dispose of 288 cases which were registered against Maratha youth during their agitation for the reservation demand.

The disposal of 288 cases against Maratha agitation protestors will provide relief to nearly 3,000 youth from the community.

Earlier, the Maharashtra government had announced to withdraw cases against protestors who hit the streets in Mumbai to oppose the felling of more than 2,500 trees in Aarey for the construction of Metro 3 crashed.

Uddhav Thackeray government also decided to withdraw cases registered against – people who opposed Nanar oil refinery project and activists who were framed in the Bhim-Koregaon violence.

However, as per the media reports, thirty-five cases can’t be withdrawn immediately given the huge amount of damage cost during the Maratha agitation. In some cases, policemen along with government servants suffered injuries.

The Maratha agitation took place across Maharashtra during Devendra Fadnavis government. The Maratha youth who participated in the agitation was slapped with cases by the state government.

However, the Maharashtra Home department has asked for the details of cases which are to be withdrawn. As per the data compiled, nearly 3,000 people will get relief.