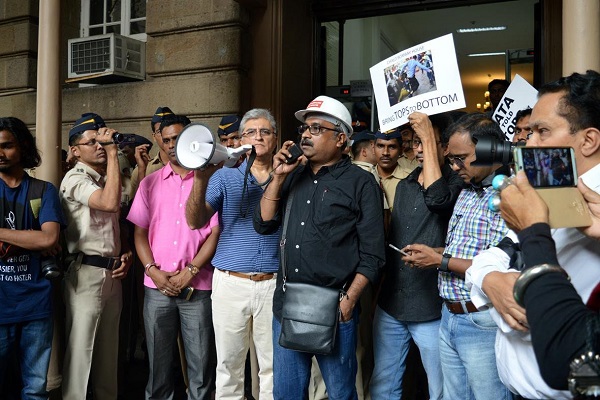 A massive rally was held opposite Bombay House (TATA’s Corporate Office) by the journalists to protest against the brutal assault on photo-journalists by the goons hired by the TATA’s on last Friday. Hundreds of scribes came out and showed solidarity with injured photo-journalists while holding placards to say ‘TATA’ to TOPS guards.

The TATA Group continues to be adamant in the issue, and it did not respond to our demand for removing Tops guards from all its establishments. We expect the TATAs to understand the seriousness of our demand immediately, or else we will continue to agitate in all possible ways in coming days. Because of our constant pressure, Mumbai Police have so far arrested seven guards from TOPSGRUP and sent them to judicial custody.

Based on our videos and press statements, the Press Council of India has taken suo moto cognizance of the case and asked one of their members Hormusji Cama to file a report by Wednesday.

Meanwhile, Niraj Bijlani, Chief Executive Officer, TOPSGRUP while apologising to the media fraternity, said, “After conducting an internal investigation, we have arrived at the decision that the acts conducted by the four individuals were totally out of order. These four individuals have taken law into their hands for which the law enforcement authorities have already taken relevant action against them. Topsgrup as an organisation strictly condemns all kinds of violence, and therefore we have decided to terminate the services of the four individuals with immediate effect”.

We also take this opportunity to ask the government to make attacks on journalists a cognizable and non-bailable offense. The Mumbai Press Club and ABI thanks you all for participating in a peace march. We set an example by following a great discipline while protesting at Bombay House.