Home Others Overwhelming response to maiden WNC Navy half marathon 2016 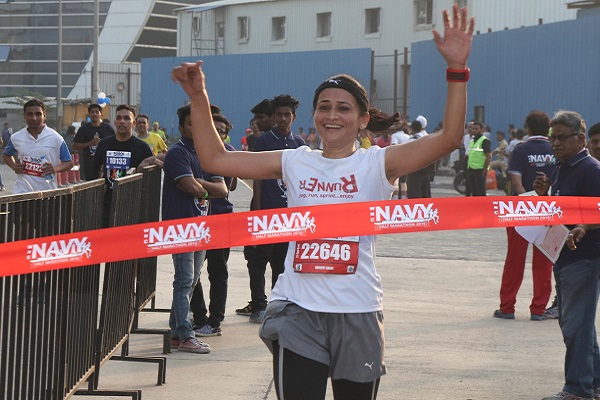 THE Indian Navy Half Marathon was held on 13 November 2016 at the MMRDA grounds in Mumbai. The inaugural event, which featured as a part of a wide spectrum of activities being organised by the Western Naval Command to commemorate Navy Week 2016, was a resounding success with over 5000 runners of all ages and genders participating. Vice Admiral Girish Luthra, Flag Officer Commanding in Chief Western Naval Command, presided over the event and gave away the prizes. Speaking on the occasion, Vice Admiral Girish Luthra said that the event will strengthen the Navy’s connect and bonding with people especially the youth. He also confirmed that the event is now planned to be conducted every year.

The runners, who had been registering for the event across three categories viz., The Aircraft Carrier Run (21.1 km), the Destroyer Run (10 km) and the Frigate Run (5 km), began assembling at the MMRDA grounds at the Bandra Kurla Complex in the wee hours of the morning. There was a palpable sense of excitement in the air as professional and amateurs alike gathered with great enthusiasm and a spirit of participation in this mega event. The build-up to the start of the race itself was spectacular as the Naval Band performed at the venue. A Zumba dance routine provided the perfect warm up and the deep drone of bikes enthusiasts injected the adrenaline at just the right time.

The event is an attempt to promote physical fitness and healthy living while interacting with the civilian community during the Navy Day Celebrations. This year’s theme for Navy Day is “Indian Navy – Professional Force – Anchoring Stability, Security and National Prosperity.”