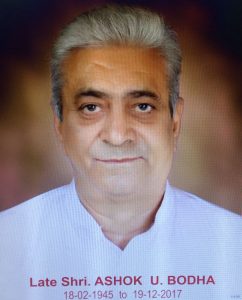 According to his son Hero, his father Ashok Bodha breathed his last at his residence.

His last rites performed at Ulhasnagar-1 crematorium on Tuesday. Many renowned personalities, large number of journalists and people from different walks of life paid their last respect and offered floral tributes and expressed their condolences on his death. His Pagdi Rasma has been kept (both ladies and gents) on December 21, 2017 at Brahmakumaris peace park, Goal Maidan, Ulhasnagar-1 between 5pm to 5.30pm.

72-year-old Ashok Bodha was very popular and veteran jounalist in distrcit Thane. Perhaps Ulhas Vikas is the first Hindi eveninger daily in Maharashtra. Many more journalists like ABI editor ‘Akela’ started his journalism carrier in Ulhas Vikas. In his condolence message Akela said,“the journalistic fraternity has lost a multi-faceted personality with the demise of Shri Bodha.”