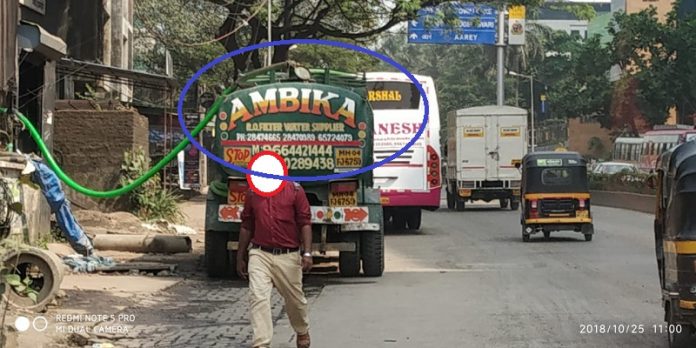 If you want a fixed, minimum salary of Rs 25000 a month, all you have to do is complain against the water theft occurrences at Powai, Chandivali. There is a strong nexus between BMC Staff, Powai Police Officials, Politicians across the party lines and water mafia. They will approach you and offer this salary to you. This offer is open for all and in perpetuity.

A Maharashtra Navnirman Sena (MNS) worker, Dr. Ved Tiwari was recently offered Rs. 25000 a month as permanent salary if he agreed to not follow up on his complaint against the theft of water. He was told that Powai Police, politicians from all parties as well as complicit BMC Officials are getting this salary as per their hierarchy and positions.

Few residents of Powai, Chandivali had complained to Ved Tiwari about the prevailing water theft at opposite Gate No – 7 of Larsen and Toubro (L&T) Company at Saki Vihar Road, Powai and Marwa Industrial Estate, Military Road, Marol. 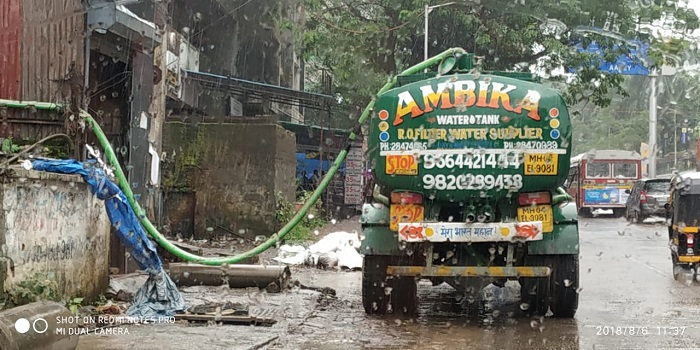 In August, Ved Tiwari sent a reminder to all the authorities regarding status of his complaint, but he got no response whatsoever. On 24th July, Ved Tiwari had also complained to Chief Minister and BMC Commissioner as his identity was leaked by the L-Ward Officials, especially by Rajan Prabhu. However, no action was taken on this complaint as well.

According to the complaint, the tankers of Ambika Water Supply were stealing BMC Water from opposite Gate 7, of Larsen & Toubro Company (L&T) on Saki Vihar Road, Powai and Marwa Industrial Estate, Military Road, Marol. Sources said that more than 15 tankers (each tanker carrying an average of 10,000 Litres) frequently every day. Someone by the name of Dinkar Mohite is owner of Ambika Water Supply company.

Few years back, the Bhartiya Janata Party (BJP) leaders raised this issue in General Body meeting in BMC and demanded that police act against this ‘Tanker Mafia’ by booking them under the Maharashtra Control of Organized Crime Act (MCOCA), but nothing has happened. Tanker Mafia still continues to steal BMC Water.

“My Complaint was not answered even in the RTI and First Appeal. I am still waiting for the Second Appeal hearing. I have demanded suspension of Prabhu. BJP leaders who demanded MCOCA against the tanker mafia but kept mysterious silence on this water theft now” said Tiwari.

Local resident Nandkishore Nalawade also said ‘Most of the L ward area is settled on the hilly terrain. People of this area have been troubled by the problem of water scarcity. Local ruling party leaders are busy in helping tanker mafia instead of solving the water problem.”

ABI View:
This lack of action by the officials despite several complaints is shocking to say the least and is symbolic of deep-rooted malaise that has creeped into our bureaucracy as well as Public Servants. Unless and until strict action is not taken against the errant officials, politicians as well as the entire water supply mafia, it will be impossible for Prime Minister Modi to weed out corruption from bureaucracy as he has promised several times.