Home Others Will ensure justice for photographers who were attacked: Press Council of India... 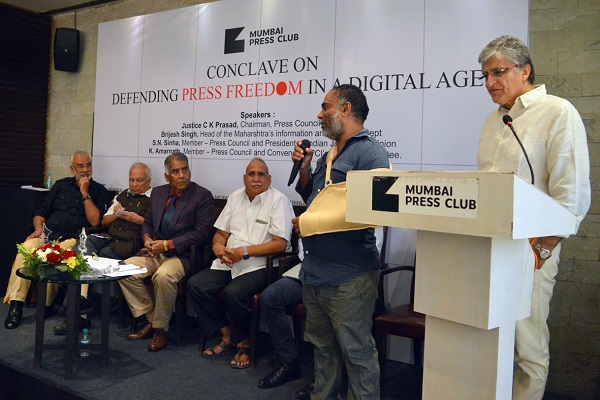 THE Press Council of India (PCI) chairman was at Mumbai Press Club to attend a conclave on ‘Defending Freedom of Journalists in Digital Age’ at Press Club in South Mumbai.

Status or wealth of any person won’t come in the way of providing justice to photojournalists who were attacked here recently, the Press Council chairman Justice C K Prasad said on Tuesday in an obvious reference to the Bombay House incident. “There was attack in Mumbai…Where few photojournalists were assaulted (in front of Bombay House). It came to my notice and we have taken a suo motu cognisance of the matter,” he said.

The incident had taken place earlier this month when three shutterbugs were allegedly beaten up by the security guards following a scuffle outside Bombay House, which serves as the head office of Tata Group, in South Mumbai, when ousted Tata Sons Chairman Cyrus Mistry had arrived to chair a meeting.

Police had made five arrests, including the security guards, in connection with the assault.

The PCI chairman was in the city to attend a conclave on ‘Defending Freedom of Journalists in Digital Age’ at Press Club in South Mumbai.

Justice Prasad said, “As the matter is sub-judice, I won’t be talking in details about it, but one thing I can assure on the behalf of Press Council is that any person found guilty, however mighty he may be, will be brought to justice. Status or wealth of any person will not come in our way.”

On a spate of attacks on journalists across the country, he said the Press Council takes cognisance of the incidents once they are brought to its notice.

“As far as safety of journalists is concerned, whenever it comes to our notice from any source we take cognisance of that. In many cases, we form a fact-finding committee. As in the case of journalist (Rajdev Ranjan) killed in Siwam (Bihar) we had constituted a committee which has submitted its report.

We asked the matter to be investigated by CBI,” he said. Pitching for financial security of scribes, Justice Prasad has proposed setting up of a welfare fund for them.

“My idea is to have a fund (for journalists) run by their peers, and Press Council of India will also contribute to that. Every working journalist shall be entitled for becoming member of that fund.

“I have written to Prime Minister (Narendra Modi) about setting up of the welfare fund (for journalists). There is advocates’ welfare fund, run very nicely for last 30 years by the Bar Council of India. Similarly, the Press council of India is talking about that (journalists’ welfare fund) and can help you (government) in constituting it,” he added.

S.N. Sinha, Member – Press Council and President of Indian Journalists Union (IJU), asked for amending relevant laws to ensure freedom of press and dealt with several cases that the PCI has taken up.

K. Amarnath, Member – Press Council and Convenor of PCI’s Safety Committee, presented several case studies of attacks on journalists and suggested ways and means to ensure safety of the fraternity.

Brijesh Singh, Secretary of Maharashtra’s information and publicity department and state government’s spokesperson, assured the journalists that a law to protect journalist was in the making at the state level. He said the journalist should keep national interest on top of their mind while reporting events and developments. According to him a fear that the journalists were kept under surveillance was baseless.

He said the government was committed to ensure freedom of press and shared some valuable tips in cyber safety as he, the IPS officer, also heads the state’s cyber safety programme. (Courtesy : PTI and Press Club staff).