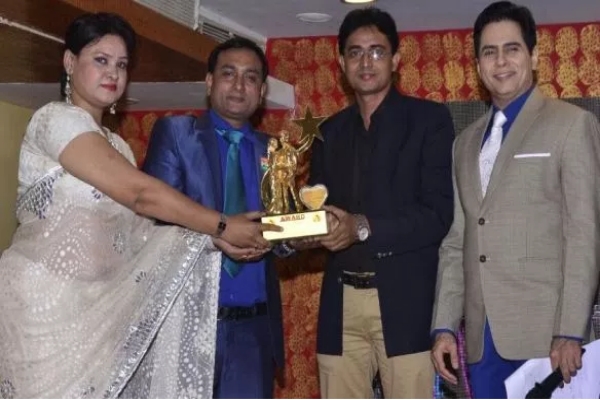 BOLLYWOOD journalist and one of the finest film critic Yogesh Mishra was awarded with ‘Best Film Critic’ award at ‘Kaljai Leera The Soulmate Award’ held in Mumbai. The award function was set on fire by renowned actor Aman Verma and actress Leera Kaljai.

Mishra who is also the Editor-in-Chief at ‘Bollywood Town’ magazine has load of experience in media industry and has worked with many leading English newspapers in Mumbai. After receiving the award, Yogesh Mishra said- “Receiving such an award is like manifesting a childhood dream which i had kept alive all this while as a closely held secret with in me and I thank the organisers for giving me due recognition in this manner on India’s Republic Day. Credit goes to my entire team of ‘Bollywood Town’. I used to do film reviews for passion but now it has turned into my profession.”

He further added, “My journey from a small town to the city of dreams, Mumbai was impossible without the support and blessings of my elder brother Shri Ganesh Mishra who is also my inspiration.” Many eminent personalities from the different walks of industry attended the award show. Apart from Yogesh Mishra, many others were also awarded for their contributions to Bollywood.

Yogesh Mishra who began his career in 2003 is currently the Editor-in-Chief of ‘Bollywood Town’ magazine. He is vastly experienced and has worked with many leading media companies in Mumbai.