Home Political Yogi Adityanath: If I cannot stop NAMAZ on road, I have no... 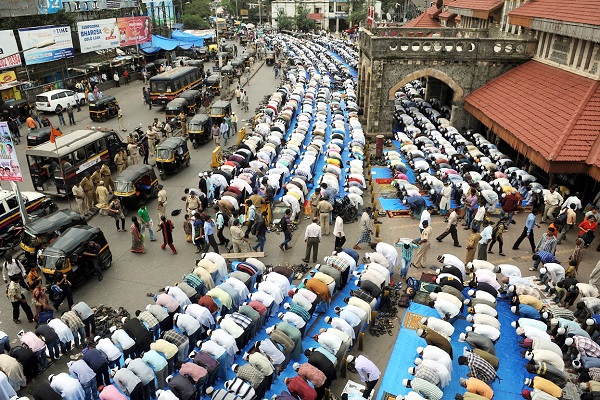 He said when officers red-flagged the use of microphones, DJs and music systems during the recent kanwar yatra (the annual pilgrimage of Shiv devotees), he told them to ensure that microphones are banned everywhere and no sound emanates from any place of worship. He said he asked the administration whether such a ban could be enforced and if it was not possible, then the yatra would continue the usual way.

Speaking at an event organised by the Prerna Jansanchar Evam Shidh Sansthan, Noida and Lucknow Jansanchar Evam Patrakarita Sansthan — RSS Sah-Sarkaryavah Dattatreya Hosabale too was present — the Chief Minister said officers briefing him on the kanwar yatra told him that use of use of microphones, DJs and music systems would not be allowed.

I asked if this was a kanwar yatra or a funeral procession. If they don’t play music and drums, don’t dance and sing, don’t use the mike, how will it be a kanwar yatra) Quoting RSS ideologue Deendayal Upadhyaya, Yogi Adityanath said no one should have any objection on the celebration of Ganesh Utsav in every village and town.

He said everyone has the freedom to celebrate festivals in the country. Those who work for strengthening the cultural unity of the country, he said, are called communal. “Jaise, agar mai kahun ki ‘garv se kaho main Hindu hoon’ toh kahenge ki dekhiye, sampradayik ho gaya.” (For example, if I say take pride in saying I am a Hindu, I will be called communal).

He said in Nepal, Mauritius or any country where Hindus of Indian origin live, they feel proud to be called Hindus. “But if we say the same in India, we will be called communal,” he said.

Targeting the previous SP government, Yogi Adityanath said those who called themselves Yaduvanshis had banned the celebration of Janmashtami at police stations and police lines. He said he was of the belief that “prayers and kirtan may bring improvement in the police system”.
Courtesy: The Indian Express

Please give fsi and permission for masjid expansion as per muslim population of the area instead of giving permission to pray on roads…..