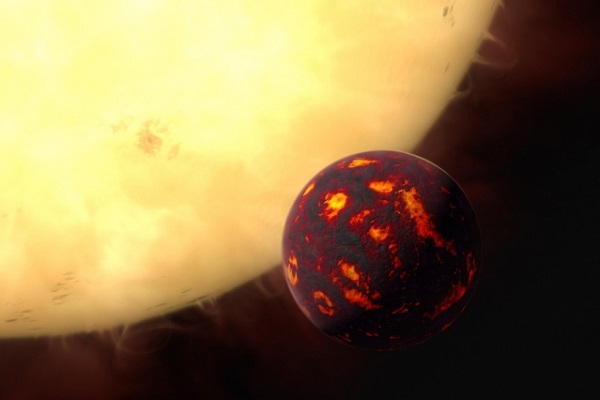 ASTRONOMERS from MIT, Cambridge University, and elsewhere have generated the first temperature map of a “super-Earth” exoplanet, revealing an inhospitable world covered in rivers and lakes of boiling hot magma. Temperatures on the planet are so high that any atmosphere is likely to have been burned off or vaporized into space.

The planet, named 55 Cancri e, resides in the constellation Cancer, at a relatively close 40 light years from Earth. It’s thought to have a rocky, rather than gaseous, composition, and at roughly twice the size of our planet, it is considered a super-Earth. But that is where all Earthly similarities end, as 55 Cancri e is essentially a heat-seeking fireball, orbiting extremely close to its star. It circles in just 18 hours, compared with Earth’s leisurely 365-day journey around the sun.

Because of its scorching orbit, scientists have thought 55 Cancri e must be incredibly hot. But the new temperature map shows that even the planet’s extreme proximity to its star can’t explain its blistering heat; in fact, the planet may be boiling from the inside out. Based on their calculations, the scientists estimate that the planet’s day side — the side permanently facing its star — reaches an unbearable 3,000 kelvins, or 4,940 degrees Fahrenheit, while its night side — the side that never sees the star — is a more moderate 1,400 K, or 2,000 F.

This huge temperature difference suggests that the planet has little to no atmosphere, because having one would generate winds to distribute heat more evenly. The night side may consist of lava that’s cooled and hardened, much like the lava flows found in Hawaii. The day side, in contrast, is a constantly boiling cauldron of magma-filled rivers and lakes.

“The planet’s day side gets to ridiculously high temperatures, which is completely unexpected,” says co-author Julien de Wit, a postdoc in MIT’s Department of Earth, Atmospheric and Planetary Sciences. “It is so hot that we need an unknown, additional source to make it that hot.”

One possible source, de Wit says, may be a process called tidal dissipation: Since the planet is so close to its star, the star’s gravitational pull may be strong enough to put a constant squeeze on the planet, causing 55 Cancri e to inwardly roast.

“It would basically boil the planet from the inside out,” de Wit says.

“A big bowl of magma”

The scientists, led by former MIT postdoc Brice-Olivier Demory, now a postdoc at Cambridge University, generated the temperature map from observations of the planet made by NASA’s Spitzer Space Telescope. Over 80 hours, Spitzer recorded the planet’s light as it circled its star several times. During this period, the researchers obtained measurements of light from various faces of the planet as it circled its star. From this, the team reconstructed a brightness map of the entire planet.

The researchers then used known size measurements of the planet and star, as well as the star’s temperature, to convert the planet’s brightness measurements to temperature. “This is the first temperature map of a rocky planet,” de Wit notes. “We’ve been able to map really big planets, because they have more of a signal. But because this one is relatively close to us, and really warm, we’re able to do this for the first time for such a small planet. And we find that this is basically a big bowl of magma — essentially, a lava world.”

The temperature map suggests that 55 Cancri e lacks an atmosphere and that it may be heating up by some mechanism other than its star’s radiation. The map also shows a hotspot on the planet — an area of intense heat — that is not directly underneath the blazing star but curiously off-center, shifted about 42 degrees to the east.
“Either by chance or because of some weird physical processes, there is a really large pull of magma to the east,” de Wit says. “Such large-scale lava flow is unusual, but it’s possible.”

“It’s nothing short of remarkable that we have actual direct evidence of possible surface features on an extrasolar planet,” says Gregory Laughlin, professor of astronomy and astrophysics at the University of California at Santa Cruz. “55 Cancri e is an incredibly alien world, and so it’s fascinating to speculate what these first tantalizing hints are telling us about what this planet looks like up close.”

Laughlin, who did not contribute to the study, adds that 55 Cancri e represents a class of super-Earths that are relatively common in the galaxy, though “compared to our Solar System’s roster of planets, it’s utterly bizarre.”

Going forward, the team hopes to identify the source of the planet’s extreme heat, using more observations from Spitzer as well as from NASA’s James Webb Space Telescope, which is scheduled to launch in 2018. The observations that were used to generate 55 Cancri e’s temperature map were made possible thanks to enhancements that increased Spitzer’s sensitivity over the last few years.

“We were finding a signal that is so tiny compared to all the previous signals we’re used to observing from Spitzer,” de Wit says. “We were really pushing the boundaries and were able to nail down a very precise piece of science.”

In the end, de Wit says that extreme exoplanets like 55 Cancri e make our own planetary system seem increasingly unusual by comparison. “Our solar system seems to be quite unique, when you look at all the crazy stuff that’s been discovered over the last 20 years,” de Wit says. “It’s fascinating, the more you think about it; it is a pretty rare, comfortable place here.”

This work is based on observations made with the Spitzer Space Telescope, which is operated by the Jet Propulsion Laboratory (JPL) and Caltech, under contract to NASA. Support for this work was provided by JPL/Caltech. (Courtesy : MIT News).