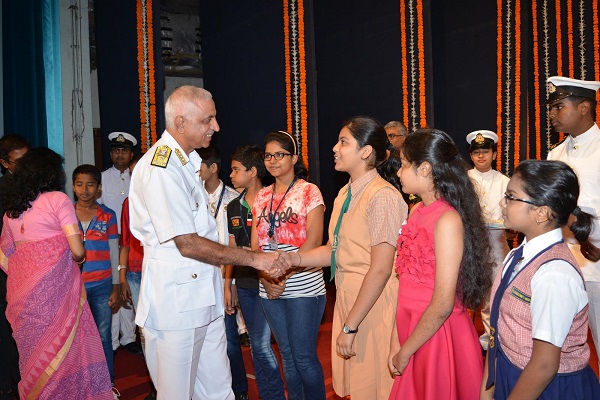 THE 54th National Maritime Day was celebrated today, with a function held at the YB Chavan Auditorium, Nariman Point, Mumbai. The event was hosted by the Directorate General of Shipping and the Shipping Corporation of India, and had participation from the merchant marine, shipping industry and maritime sector. Vice Admiral Girish Luthra, Flag Officer Commanding-in-Chief, Western Naval Command was the Chief Guest. He was received by Dr Malini V Shankar, DG Shipping and Captain Anoop Sharma, CMD, Shipping Corporation of India Limited and Capt BB Sinha, Chairman, National Maritime Day Celebrations Committee. A Guard of Honour was presented to the C-in-C by the cadets of Indian Maritime University, Mumbai Campus.

During the function, awards for excellence were given by Vice Admiral Girish Luthra to selected shipping companies, seafarers and service providers, for their achievements. The awards were finalised by the National Maritime Day Celebrations Committee. The Welcome Address was delivered by Dr Malini V Shankar, DG Shipping and the Keynote Address by Smt Lakshmi Venkatachalam, Ex-DG Shipping.

During his address, the C-in-C highlighted the importance of the maritime domain in national, regional and global growth and development. He emphasised that the Indian Navy and the Indian merchant marine complement each other, for operations at sea. He brought out the emerging trends in the Indo-Pacific region, merchandise trade, export-import and the new focus on the maritime domain. He stated that the Indian Navy has adapted its strategy to the changing environment, in order to promote and strengthen security, stability and safety at sea.

The National Maritime Day celebrations this year had started on 29 Mar 17, with a function being held at New Delhi. The function on 05 Apr 17 at Mumbai was the culmination of week long activities undertaken all over India.