Home Political MNS offers ₹5,555 to those who inform about illegal migrants from Pakistan... 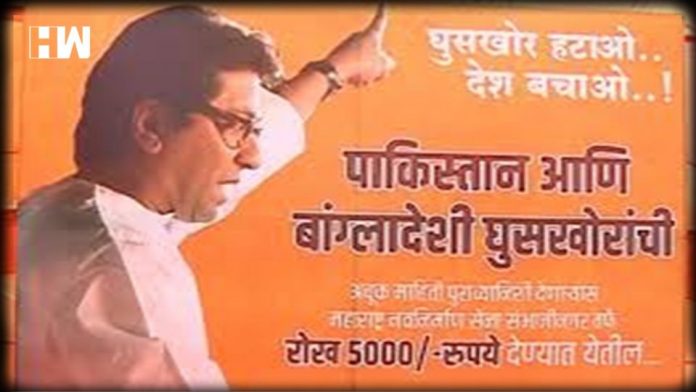 THE Raj Thackeray-led Maharashtra Navnirman Sena (MNS) put up a poster in Mumbai’s Bandra and other parts of the state announcing a financial reward of ₹5,555 for information about illegal migrants from Pakistan and Bangladesh.

Another poster in Aurangabad offered a financial reward of ₹5,000 to informants who provide information about illegal migrants from Pakistan and Bangladesh.

The MNS has started a ‘campaign’ where its workers and leaders are searching for illegal migrants from Pakistan and Bangladesh and handing them over to the police.

Raj Thackeray in his speech earlier extended full support to the Modi government in evicting illegal migrants from Pak and Bangladesh. The MNS chief also extended his support to the Citizenship Amendment Act (CAA).

Earlier, MNS put up a poster in Bandra near Matoshree – the family residence of Maharashtra Chief Minister Uddhav Thackeray – asking him to start cleaning up his own locality.

“Respected Chief Minister, if you are serious about action against illegal infiltrators, start by cleaning your locality (Bandra) first,” the poster read.

An FIR against MNS workers was also registered for allegedly trespassing into the home of people they suspect to be Bangladesh nationals and asking them to show documents to prove their citizenship.

The Uddhav Thackeray-led Maha Vikas Aghadi (MVA) government has not yet clear its stance on the implementation of the CAA and the proposed NRC and the NPR. Congress and NCP are pressuring the Shiv Sena to pass a resolution against the same in the ongoing Maharashtra budget session.