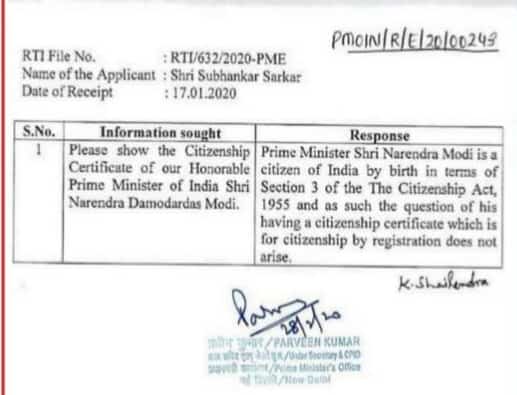 Ever since the BJP government at the centre has passed the Citizenship Amendment Act, protests against CAA are continued across the country and every citizen of the country is worried over how to prove his citizenship.

In response to his RTI, the Under Secretary of the PMO Praveen Kumar wrote: “Prime Minister Shri Narendra Modi is a citizen of India by birth in terms of Section 3 of the Citizenship Act, 1955 and as such the question of his having a citizenship certificate which is for citizenship by registration does not arise.”

The response of Prime Minister’s Office is ambiguous and unclear.

The citizens of India are worried on the issue of citizenship, even the PMO fails to show the citizenship certificate of Prime Minister Narendra Modi.

After the implementation of CAA if the government officials ask for citizenship document, the citizens can claim themselves to be citizens by birth as in the case of prime minster Narendra Modi. But the question is whether such claim by an ordinary citizen will be accepted?