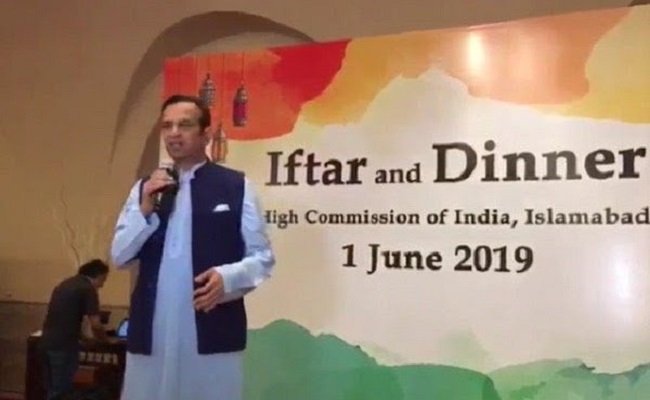 New Delhi: Indian diplomats, who had been invited for an Iftar party hosted by the Indian High Commissioner in Islamabad, were stopped from attending it by Pakistan security guards on Saturday. The Iftar party was being hosted by Indian High Commissioner Ajay Bisaria. The list of guests invited to the Iftar party included Pakistan PM Imran Khan, President Arif Alvi and other political dignitaries. Khan and Alvi, however, didn’t make an appearance.

One of the guests, Pakistan Peoples Party leader Farhatullah Babar, tweeted saying that when he got to Serena Hotel it was barricaded. Despite this, he tried entering only to be told that Iftar had been cancelled. “When insisted, I was told to use other gate. Other gate also closed and told to go back to front gate again. What’s going on, something fishy.” his tweet reads.

“We apologise to all our guests who were aggressively turned away from our Iftar yesterday. Such intimidatory tactics are deeply disappointing…they not only violate basic norms of diplomatic conduct and civilized behaviour, they are counter-productive for our bilateral relations,” Bisaria was quoted by news agency ANI as saying. The news agency further quoted its sources as saying that Pakistani agencies “laid siege” on the hotel, and “harassed, intimidated and turned away hundreds of guests”. “Before that, they called invitees from masked numbers and threatened them with consequences if they attended the Iftar,” a source added.

The action seems to have come in retaliation to the May 28 incident in New Delhi when guests invited to the Iftar party at the Pakistan High Commission were subjected to similar harassment by cops. Jammu & Kashmir National Conference leader Omar Abdullah criticised the Pakistani side for their “tit for tat diplomacy”. “It was stupid when we did it outside the Pakistan High Commission in New Delhi and it’s stupid when it’s done outside our’s in Islamabad,” he tweeted urging the countries to “stop this nonsense”.

Even on Pakistan Day on March 23, Delhi police officials at the High Commission warded off all the guests saying that the Indian government had boycotted the event, so one should enter by their own “conscience”. The Indian mission to Pakistan has been hosting Iftar for 12 years now after the tradition was started by Sibi George (who is currently serving as India’s Ambassador to Switzerland).