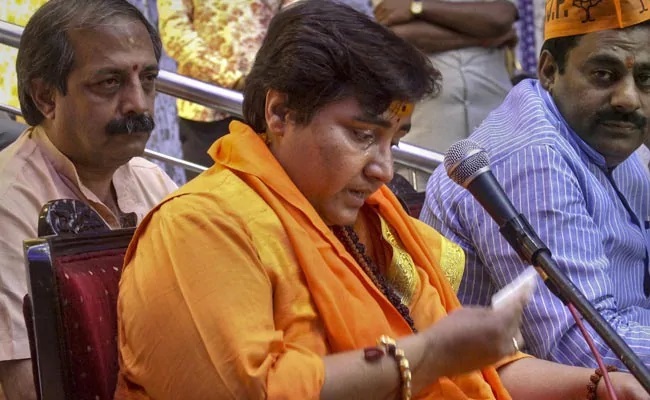 In the notice issued to her on Saturday evening the district election officer, Bhopal, Sudham Khade has sought an explanation from Thakur within a day while mentioning the statement in the notice. The district election officer (DEO) has served another notice to BJP candidate from Bhopal Sadhvi Pragya Thakur on her statement that she had taken part in the demolition of the disputed shrine at Ayodhya in 1992.

Pragya Thakur in an interview with a TV news channel reportedly said, “We will build a Ram temple and we will build an imposing (temple). We had gone there to demolish the structure. I climbed up on the structure to raze it and I feel proud of this. God had given strength to us and we removed a scar on the face of the country.”

In the notice issued to her on Saturday evening, the district election officer, Bhopal, Sudham Khade has sought an explanation from Thakur within a day while mentioning the statement in the notice.

The DEO says in the notice, “The statement seems to be in violation of chapter 4 of the model code of conduct which states ‘No activity, which may aggravate existing differences or create mutual hatred or cause tension between different caste/communities/religious/linguistic groups, shall be attempted’.”

Earlier, the DEO found a violation of the model code of conduct in Thakur’s remarks on former Mumbai anti-terror squad chief Hemant Karkare and a notice was served to her by the chief electoral officer Madhya Pradesh VL Kantharao on Saturday.

Pragya Thakur had said in a programme that Karkare had died because of her curse. However, later she apologised for her remarks. She is yet to give her reply to the notice. Meanwhile, the CEO has issued an advisory to all political parties to refrain from using objectionable language and violating the model code of conduct otherwise strict action will be taken against them. On her reported statement on the disputed shrine at Ayodhya, Thakur said, “I talked of my Ram and religion. I will give a reply to the notice.”