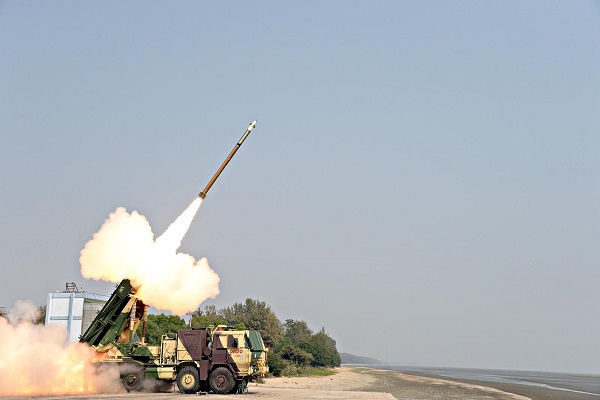 THE Pinaka Rocket converted to a Guided Pinaka was successfully test-fired from Launch Complex-III, ITR, Chandipur today. The Pinaka Rocket Mark-II, which evolved from Pinaka Mark-I is equipped with a navigation, guidance and control kit and has been transformed to a Guided Pinaka. This conversion has considerably enhanced the range and accuracy of Pinaka. The test-firing has met all mission objectives. The radars, electro-optical and telemetry systems at Chandipur tracked and monitored the vehicle all through the flight-path. The Guided Pinaka is developed jointly by ARDE Pune, RCI Hyderabad and DRDL Hyderabad. ITR Chandipur provided the range and launch support.

Raksha Mantri, Manohar Parrikar has congratulated the DRDO, industry and the Armed Forces for the successful flight-test. P.K. Mehta, DG (ACE) and Dr. S. Christopher, Secretary, Deptt. of Defence R&D and Chairman, DRDO, also congratulated all the teams that participated in the successful test firing.