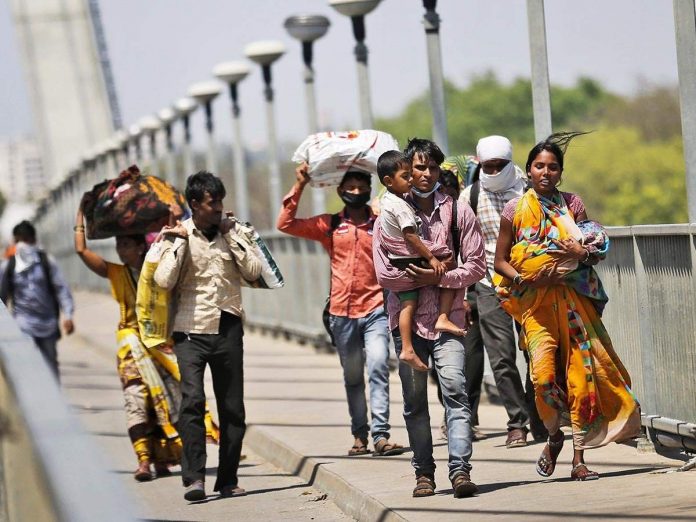 THE Supreme Court on Tuesday said it would not get into budgetary or financial domain of the Union government by directing it to pay basic minimum wages to migrant workers during the lockdown period, as demanded in PILs by rights activists Harsh Mander, Swami Agnivesh and others.

Another PIL sought a direction to the state governments to pay minimum wages to self-employed workers like rickshaw pullers, auto-drivers, etc. But a bench of Justices N V Ramana, S K Kaul and B R Gavai wondered how the courts could direct the Centre to give money to states for this purpose/
“Are we experts in such matters? These are elected governments at the states and Centre having a mandate to govern. We are not getting into the issues of financial support and adequacy or inadequacy of funds,” it said.

Appearing for rights activists, advocate Prashant Bhushan cited a study conducted on 11,000 migrant workers and said nearly 90% of them said that they have neither got any ration or cooked food from the governments. He said the 2011 census estimated population of migrant labourers to be 4 crore, but the Centre said it has provided shelter and food to 15 lakh, as reported in TOI.

“It is a mockery of social distancing in the crowded shelters. The Centre’s claim that it has transferred Rs 500 per month to women having Jan Dhan accounts is inadequate. The government recognised the need for monthly payment to migrant workers. That is why they asked the private employers to pay their workers. Nearly 90% of the workers said they have not been paid during the lockdown period. Government said it would pay Rs 5,000 to each construction worker. But they constitute a very small minority of the population,” Bhushan said, demanding minimum wage payment to migrant workers during lockdown period.

Solicitor general Tushar Mehta came out all guns blazing during the video-conference hearing and rubbished the petitioners’ claim about migrant workers going hungry.

“Who told petitioners that no worker has been paid? Who conducted the survey that showed that workers are hungry? What have the petitioners done so far to help migrant labourers? The government, apart from transferring money to the needy, has given benefits under the direct transfer schemes. Around 50,000 NGOs are working shoulder to shoulder with governments to provide food and basic needs to migrant workers, poor and destitute during lockdown period. But there are some rights activists whose social work is confined to filing PILs.”

Mehta added that helpline numbers across the country are being monitored actively by two ministers of state and the home minister.
“Anyone seeking food gets it within an hour of making a grievance on the helpline. The petitioners have not specified which worker they represented and who is going hungry,” he told the bench.

While questioning the veracity of the survey cited by the rights activists, the Justice Ramana-led bench said, “In a situation like this, the court cannot say whether some task has to be done one way or the other. It is an unusual situation. Someone may say something is not working well. But everyone is trying to do their best.”

The bench disposed of the petition saying the petition and accompanying material will be considered as a representation by the Centre to take steps it deemed necessary to help the lot of migrant workers.