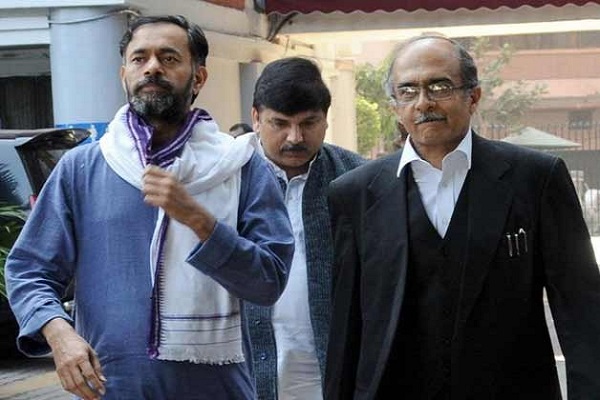 According to media reports AAP’s National Council, comprising 400 members, met at a resort and decided to expel Bhushan and Yadav from the party’s National Executive. Yadav’s supporters Anand Kumar and Ajit Jha were also removed from the Party’s national executive.

After making an emotional speech, AAP chief Arvind Kejriwal left the venue before the resolution to remove the two leaders was introduced by Manish Sisodia. After announcement Yadav sat on protest outside the meeting venue with his supporters, alleging that “legitimate members” were not being allowed inside.

“It was all scripted,” said Yadav, alleging that “bouncers” dragged his supporters out of the meeting so that Kejriwal’s loyalists would prevail. Violence marred the meeting with supporters from both camps shouting slogans and pushing and shoving each other outside the venue.

On Friday, a secretly-taped phone conversation was leaked, in which Kejriwal is heard abusing Bhushan and Yadav threatening to exit the party with his 67 lawmakers from Delhi. Any other party would have thrown them out.