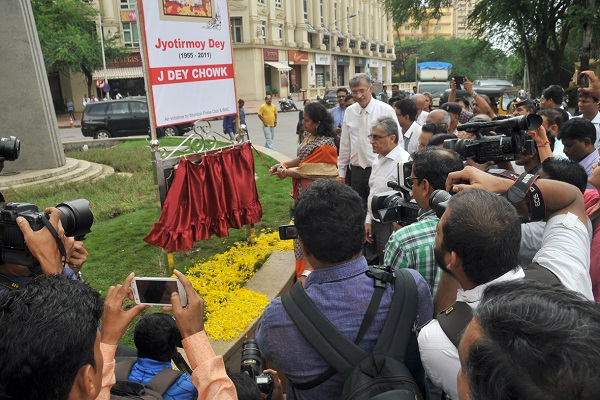 WITH the efforts of last five years by the Mumbai Press Club, the D-Mart Chowk at Powai has been named after J Dey, our colleague and friend, who was shot dead near that place. Because of steps taken by the Club, the Municipal Corporation of Greater Mumbai, renamed it as Jyotirmoy Dey Chowk. Mumbai Mayor Snehal Ambekar did the honours of dedicating the square in memory of the slain journalist on Wednesday, July 13, 2016.

A little over 5 year ago, on 11 June 2011, senior crime reporter and a fearless investigator, Jyotirmoy Dey, was gunned down amidst a hail of bullets in Hiranandani Gardens, Powai. Everyone knew him as J Dey. As Mid-day’s Editor-Investigations, he was snatched away cruelly at the prime of his career.

J Dey’s killing united us all and the Mumbai Press Club led a campaign to get justice for Dey. The morchas and outpouring put the then Pritviraj Chavan government on the back foot, and the police scrambled to arrest suspects and find motives for the murder. A dubious police officer who had tried to hide the trail was suspended, some sharp-shooters who executed the assassination were caught; and the police tried to create red herring trail by planting stories against J Dey to divert attention from the main trail.

The Mumbai Press Club fought long and hard to have the case transferred to the C.B.I. and went up to the Supreme Court. But to no avail. The Mumbai Police wouldn’t let go. They named gangster Chhota Rajan as the man who coordinated the killing, and blamed and arrested journalist Jigna Vohra as the main culprit who had ‘instigated’ Chhota Rajan on account of ‘professional rivalry’. Ultimately, Jigna Vohra, arrested under the dreaded MCOCA Act, was released on bail for lack of evidence 8-9 months later; and the investigation did not go beyond Chhota Rajan.

Ironically, the gangster was arrested a little over a year ago, and all cases where he was involved have now been transferred to the C.B.I. – something we had demanded 5 years ago. Nailing down crucial details of J Dey’s killing – who was behind the trigger and what was the motive – is still wide open.

Unfortunately, we have short memories, and for most of us J Dey is dead and buried. However, the Mumbai Press Club continued its ‘Justice for J Dey’ campaign. To mark his contribution to journalism and to his brand of fearless crime reporting, the Club has been successful in convincing the Brihanmumbai Municipal Corporation (BMC) to name the Powai Garden’s D-Mart Chowk as ‘J Dey Chowk’.