Home Entertainment I don’t see any reason to define myself: Juhi Chawla 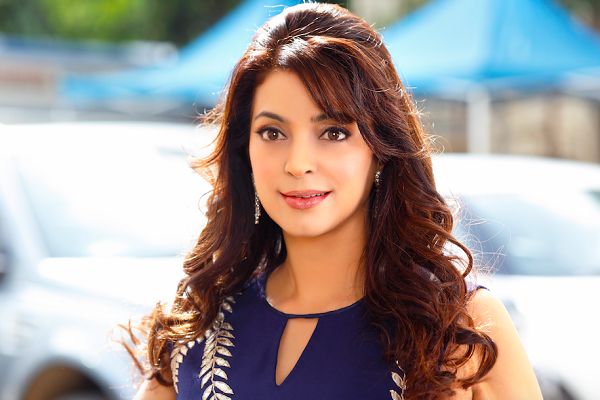 Beauty queen and Bollywood actress Juhi Chawla is still the heart-throb of millions. She dominated the industry in the 90’s and gave many back to back hits, receiving several awards for her work. She even played the negative role of an antagonist in the critically acclaimed ‘Gulab Gang’. Her portrayal was highly appreciated by critics and audiences alike. Here she talks to ‘Bollywood Town’ about her childhood funny incidents, an upcoming South Indian film, future plans and more…

From a beauty pageant winner to a top Bollywood actress, how do you define yourself?

I actually don’t see any reason to define myself. Life has been amazing, it’s been throwing up surprises, twists, turns, my life has given me more than I dreamed of in good, happy ways and not so happy ways too. Every day is a new day, I am facing new situations, you can call it challenges, opportunities, and so I am just always trying to learn and grow, become a better person each day, think better, do a good deed each day, work on a good film, hence I am always trying to better myself.

You have received several awards for your acting. Any specific award that you still wish to win?

Yes, I have won awards and received a lot of appreciation throughout my career for my work. Maybe not so critically acclaimed but definitely my audience has loved me, and wherever I run into people, the way they still greet me is really heartwarming! So now, I think I would like to win a national award. That would be nice.

How were you as a kid? Would you like to share any of your childhood funny incidents?

A funny childhood incident that comes to mind is when I was in the 4th standard, and at that time my mother was very keen that I become a classical dancer. She used to do Bharatnatyam and so she was very eager that I too take up classical dancing. So I had a Kathak teacher who used to come on Saturday and Sunday mornings to teach me, and if by chance he would even come 5 minutes late, I would just escape to my friends house somewhere in the building, and I wouldn’t tell anybody where I was going. So what would happen is that my maid and parents would be looking all over the building for me, and since we used to stay in an 18-storey building, they had to check on all my friend’s homes to find me.

Several scandals and suicide cases happened recently in Bollywood. Do you feel Bollywood is still a safe place to work for women?

Like in any profession, you meet good people, not so good people and really not so good people. When I was doing films in the 90’s and early 2000’s, in a unit of around 150 people on the sets there were 3 or 4 women and the rest all men. So the 3 women would be myself, my hairdresser and sometimes my mum or my aunt who would come along with me while shooting, or if there was another female co-star, then her hairdresser or someone from her team as well, though other than that there were only men on set. Now, it has changed so much. There are about 40-50% of young girls on the sets in every department. From costume to makeup to hair dressing, to even editing, directing, cinematography and art design. Even celebrity managers are all young women. In that atmosphere, in terms of safety, I think there couldn’t be a better time for a young girl to be a part of this.

Any message for new actresses or aspirants?

I think that if you are really serious about your work and intentions, then things work out. If not instantly or overnight, but in time they do. So it really depends on what you want out of your life, how much you want, how sincere you are in your efforts, because you cannot keep a good person down. There is plenty of work to go around, plenty of opportunities in regard with film, television and theatre. There is always going to be work, but if one is only hell-bent on being a hero or heroine, they are then limiting themselves.
From my own experience of where I have been, I think that a divine hand guides you, protects you and takes you where you ought to be. So just have faith and keep your focus strong.

Given a chance, would you like to join politics actively?

No. I don’t think I am cut out for it. I wouldn’t be able to deal with people from morning to night and being at the beck and call of people, it’s just not me.

Yes, it was after a long time that I ventured into doing something for Kannada and what I am doing in the film Pushpak Vimana is playing myself. So I do play Juhi Chawla who happens to be performing an item number, a very prettily shot Indian number in the film, which showcases at a very crucial time in the story. There is a twist which comes up around the time of the song. The song is part of an annual day in a jail and this performance happens by the dancers and me.

The film Pushpak Vimana is also the 100th film of Ramesh Arvind Ji and the last time we kind of worked together was in Shanti Kranti where he was cast opposite Khushboo and I was cast opposite Ravichandran Ji. So though we worked in the same film, we didn’t have a scene together, though that was the last time I worked with him and now after years I have done this guest appearance in his 100th film.

Do you have a performance you are most proud of, or one that’s dearest to your heart?

The one which stands out for me is Gulab Gang, which was totally dark and which I had a great time working on. It turned out so fantastic that even I was very impressed.

What was the toughest film you’ve had to shoot?

The toughest film I’ve ever had to shoot was Arjun Pandit, which was a lovely film. With Sunny Deol and directed by Rahul Rawail some years ago now. The film’s first half seemed like a romantic one, but the second half brought out me being almost the villain, which again had a negative shade. That film was the toughest because again me playing the negative role, which was a little different, and the action sequences, which Sunny Deol was great at, but not me. One of the most unnerving difficult sequences was the climax of the film, which had Sunny Ji and I shooting under a running train. Had Sunny Ji not been there with me, I think I would have either fainted or just frozen where I was, or my head would have just been chopped off. We were underneath the train while it was running over us, which was so frightening and disorienting that I kept wanting to raise my head and had to repeatedly remind myself that if I raised my head even a couple of inches I would not have a head. So yes, it was one of my toughest films I’ve shot till date.

What are your future plans?

My life has been getting more and busier in the last few years. Apart from films in the past few years I have developed many more interests. The work that I do for radiation awareness; I have also recently become a trustee for our family run Gurukul in Porbandhar which has around 2,000 girl students where I look into the workings of the school there. I also have 2 farm lands outside of Mumbai so we have recently taken up organic farming, so first we started with Mango orchards and now it has become vegetables, and so one has to oversee all of that. I do learn a bit of music as well and my yoga regularly. So all of this does take up my time apart from family and work, and so my days just fly. This year I do have two really good scripts that I am looking forward too.