KANJUR MARG police have registered an FIR against Mayur Shinde and his accomplices in connection with an extortion case. Mayur Shinde is a notorious criminal attached to the Shiv Sena party and is engaged in criminal activities on behalf of Shiv Sena MLA Sunil Raut.

“We have registered FIR. Matter is under investigation and we will take necessary action, said Deepak Saralkar,” Investigation officer.

The 32-years-old Gunjal is a resident of Datar Colony, Bhandup (East), a civil contractor by profession and runs a company called Mexican Associates. Gunjal has currently got a contract in Arcade group and Runwal Bliss in Kanjur Marg area. On June 8, 2016, Mayur Shinde called and threatened Gunjal and on second day Mayur Shinde went to Arcade Company site and stopped the work stating work would be allotted to him. After half-an-hour Mayur Shinde, Akash Kale, Mayur Bodakhe and Gautam Ingale alias Michael appeared there. They threatened Gunjal and demanded Rs 2 lakh extortion if he wanted to continue work in Arcade Company. They also demanded Rs 100 per dumper deployed in Crompton Company. They thrashed Gunjal badly. Gunjal complained over phone. Kanjur Marg police rushed to the spot. Shockingly Mayur Shinde and his followers thrashed Gunjal in front of the policemen. 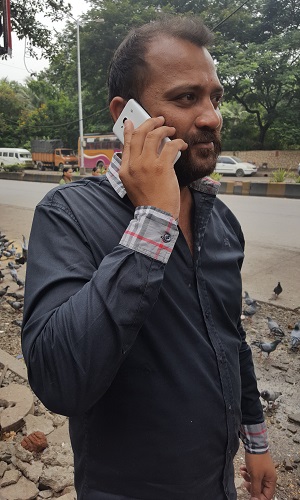 Mayur Shinde performs his criminal activities on behalf of Shiv Sena MLA Sunil Raut. Raut is his godfather. After the FIR, Raut was shocked to hear that Kanjur Marg police had dared to register the extortion FIR against Shinde. However, Sunil Raut asked police not to raid Shinde’s hideout saying he would surrender before the police soon. No surrender happened. Sunil Raut tried to influence investigation officer Deepak Saralkar but dashing officer Saralkar showed Raut his place. Saralkar told him that he will investigate matter in proper way and will collect CDR of Mayur Shinde to know who all were in touch with Shinde. Raut understood the seriousness of the matter and disconnected the call stating he did not know any Mayur Shinde.

Who is Mayur Shinde ?

Shinde was earlier residing in Bhandup and now in Savarkar Nagar, Thane. He is vice-president of Bharatiya Mathadi and General Kamgar Sena. He runs a company by name M. S. Infra. In 2000 Shinde was arrested in connection with the murder of Gulam Ali, a notorious criminal living in the area at Bhandup (West). Then he was booked under MPDA act.

Shinde was arrested and booked under MCOCA for firing at Bhandup-based real estate developer Vaibhav Kokate’s office on November 4, 2011. Shinde had demanded protection fees of Rs 15 lakh and three flats in a new real estate project at Kanjur Marg.

On March 19, 2016, Mayur Shinde was arrested by the Mulund police along with his seven other accomplices for abusing and thrashing police sub-inspector Premnath Thotam. PSI was conducting a drive against drink-driving in Mulund.