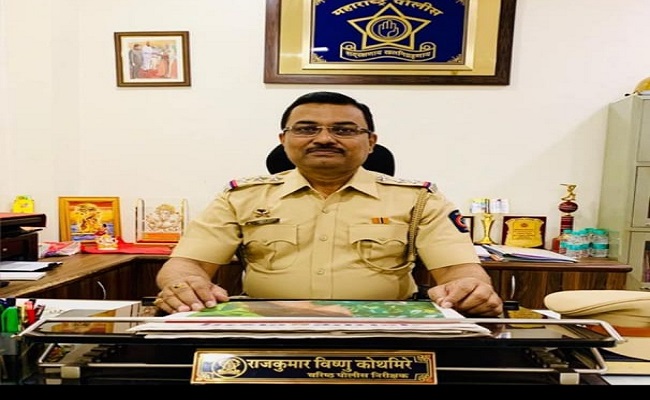 IN a shocking revelation, it was revealed that Inspector RajKumar Kothmire, along with his team, posed as ED officers and extorted a Saree depot in Ulhasnagar to the tune of Rs 15 Crores.

This incident once again shows how deep rooted corruption is amongst some officers within the Police department. Rajkumar Kothmire, in particular has a long history of corruption charges and allegations behind him. He was earlier named as one of the most corrupt officers in Thane Police. An informer has now demanded that he be rewarded and has approached the ED’s office for the same. As per the informer, amount extorted was Rs 15.80 Crores.

Rajkumar Kothmire is currently posted at Anti Extortion Cell (AEC) in Thane police as a team head since a long time.

The informer (name withheld by ABI to protect identity), a resident of Ulhasnagar in Thane district demanded his reward from ED by writing a letter to them on February 11, 2021 after Kothmire refused to give his reward money. The copy of letter is available with ABI.

The incident took place on June 9, 2020. Rajkumar Kothmire’s team comprising inspector Mohan Karmarkar, Shinde, Hemant Mahale, Sandip Bhangre and others raided Swamini Saree at Ulhasnagar. The officials introduced themselves as ED officers. Rajkumar Kothmire did not participate in the raid but he was supervising the team over his mobile phone. The informer himself was present in the raid with his friend Bunty Gaikwad. The team found Rs 5 Crore 80 lakh cash in one cupboard. Suddenly Kothmire called Karmarkar and asked him to stop the raid. Since then the informer is running from pillar to post to get his reward. He also met Commissioner of Police Vivek Phansalkar and Assistant Commissioner of Police (ACP) NT Kadam but returned empty handed.

The informer had information that owner of Swamini Saree Depot (near Bank of Baroda, Nehru Chowk, Ulhasnagar-2) has kept Rs 300 crore cash in the store. Informer shared it with Chhava Sanghatna President Nikhil Gole. Nikhil Gole shared it with Nasik based policeman (perhaps suspended) Sharad Patil. Sharad Patil rushed to Mumbai. Informer, Nikhil Gole, Sharad Patil and another person Raju met at Tawa hotel in Bandra, Mumbai. Raju (man of Sharad Patil) told them that he knows ED officer Rajkumar Kothmire. On June 9, 2020 Kothmire’s team raided the Saree Depot posing as ED officers. They found Rs 5 crore 80 lakh in iron cupboard. During the raid Saree Depot owner contacted Deepak Chhatlani the working president of Ulhasnagar Traders Association. Deepak Chhatlani contacted to Omie Kalani. Omie Kalani contacted Kothmire and asked him to stop the raid and provided a guarantee that remaining money will be handed over to Kothmire. The raid was then stopped by Kothmire saying, “upar se phone aa gaya.”

Last month the informer thrashed Raju in Tawa hotel after he failed to give reward money to him. Raju claimed Kothmire had not given money to him too. Kothmire akele akele sab kha gaya.

ABI View: Inspector Rajkumar Kothmire has been accused of corruption charges since a long time. However, surprisingly no action seems to be taken against him by the department. It is high time that police department looks into this accusations and takes necessary action against him.