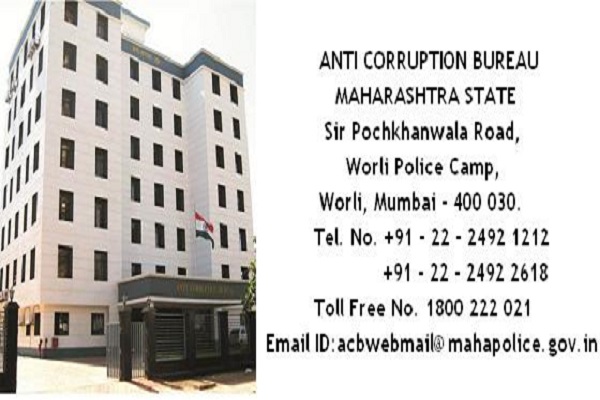 THE Raigarh unit of Anti-Corruption Bureau (ACB), Maharashtra has arrested Joint Commissioner of Sales-Tax, Mumbai on Sunday for demanding Rs. 60 lakh and accepting Rs. 20 lakh bribe. The ACB officials have arrested one more person who accepted the bribe money on behalf of Joint Commissioner.

The complainant is builder by profession. Shinde issued fake notice to complainant to pay penalty of VAT tax for the period of 2006-2008. Shinde allegedly faked signature of his junior, an assistant commissioner. Shinde demanded Rs. 60 lakh for settlement of the dispute and not taking action and also cancelling the notice. After negotiation Shinde sealed the deal at Rs. 25 lakh.

On Sunday around 11.35 am Bhopali caught red handed at complainant’s beer shop at Panvel while accepting Rs. 20 lakh.

ACB officials visited and supervised the house search of Ramdas Paraji Shinde at his Sheetal building, flat no.602, 6th floor, Dr. A.B. Road,Worli, Mumbai. It is a government quarters, one BHK flat.
During search following property has been disclosed.
Property on the name of Shinde…
1-Partnership firm by name Mahalaxmi Construction with partner Ramesh Jain, Irfan Bhopali and Amol Bade. Shinde have 20% shares in the firm. They have purchased 3360.9 Sq meters plot at Panvel for development from Shumansha Durga Trust valued Rs. 6,46,55,000 as per agreement papers, on November 28, 1995.

No other property like hard cash etc is found. Panchanama is going on.