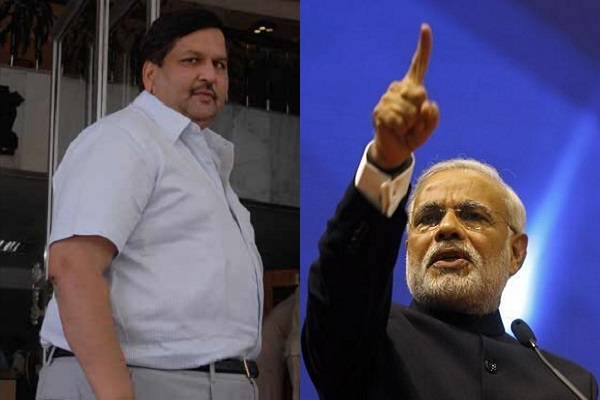 PRIME Minister Narendra Modi failed to keep his promises made to a Dombivli resident during the Member of Parliament (MP) election. Modi promised that if he would be Prime Minister action will be sure taken on Mangal Prabhat Lodha, Mumbai’s top builder and developer.

Mangal Prabhat Lodha who holds a degree in law from Jaipur University is a Member of Legislative Assembly (MLA) from Malabar Hill constituency and also Mumbai Vice President of Bharatiya Janata Party (BJP). While Lodha is the chairman, executive director and promoter of the company, its day-to-day operations are carried out by sons, Abhishek, who holds a masters degree in industrial engineering from the Georgia Institute of Technology and Abhinandan, deputy managing director, who has done his business administration degree from Cardiff University in UK.

Dombivali resident Sadanand Sante (35) is complaining against Mangal Prabhat Lodha for long times. Lodha has allegedly grabbed his two acre land worth of Rs. 15 crore located at Kolegaon, Dombivli (east) in Thane district. On January 4, 2014, Lodha managed to the power of attorney and on January 22, 2014, gets registered to the land in Rs. 4 crore only.

Sante was complaining against Lodha since he learned that Lodha is planning to grab the plot at any cost. Sante sent notices to Lodha to not to do so.

In this matter Sante knocked the door of Shiv Sena leader Eknath Shinde to get justice. Shinde advised him to make a video film (copy available with ABI) of entire incident.

On April 21, 2014 Narendra Modi had come to Kalyan for an election campaign to Shiv Sena candidate Shrikant Shinde. Shrikant is son of Eknath Shinde. Sante his brother-in-law Mahesh Patil met Narendra Modi through Eknath Shinde and complained against Mangal Prabhat Lodha. Sante complained that Lodha is habitual land grabber and cheater. Sante also showed video film to Modi. The film was flashed on four big screens. Impressed with video film Modi promised that he would take sure action Lodha if BJP forms government in centre and he becomes Prime Minister.

Maharashtra Navnirman Sena (MNS) leader Raju Patil has sent defamation notice against 14 persons including Shiv Sena President Uddhav Thackeray and Eknath Shinde in the matter. Raju Patil was contesting election against Shrikant Shinde. The video film which was shown to Narendra Modi has contents that Lodha allegedly taking help of Raju Patil (who have controversial family background) for grabbing land in Dombivali area.

A former BJP corporator Arvind Bane has complained to several top authorities including the Prime Minister Narendra Modi against Lodha urging them on not making him minister of Maharashtra government. Bane alleged that Lodha is a land grabber and has no reputation in society to become a minister. It may be true that Lodha has paid Rs. 200 crore for the party fund to become a minister.

Lodha had come under the scanner of Enforcement Directorate (ED) with a case under the provisions of the Prevention of Money Laundering Act, being probed. Lodha’s name was disclosed by the Income Tax (I-T) department, Mumbai in an appraisal report in which he transacted money through Hawala out of the country.

Sanjeev Pandey, a flat buyer has filed a writ petition in the Bombay High Court against Lodha seeking interest on late possession of his new flat at Dombivli Casa Bella project. Lodha has extorted late fee from Pandey but not given possession on time.

Despite repeated attempts Lodha was not available for comments.