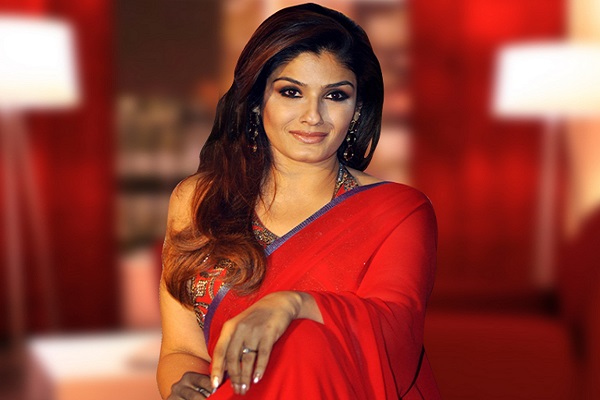 SHE started her career with a bang, winning an award for her debut movie. The times kept getting better since then. Raveena Tandon became a name to be associated with successful and blockbuster movies. The audience was always moved after seeing her varied roles. Her performance kept getting better. Now, sharing the joy of 25 beautiful years in Bollywood with her is quite an unmatched experience. Chats with the actor, producer and director are just so refreshing and motivating…

They say, “I want to travel the world in 80 days”. What do you plan to do to celebrate 25 glorious years in Bollywood ?
The years have gone really well. I am thankful to my family, friends and my fans for their love and support. I am waiting for an exciting offer to come my way. I’ve never planned mylife; that’s when I feel I enjoy it the most.

Who would you like to thank for your fantastic journey in the industry ?
I want to thank all my directors for giving the courage and significance to me. I never imagined it will happen to me. It has been fantastic … This is called a true and fantastic journey!

Is there any film that you regret not doing?
I don’t have regret for not doing any film. I turned down (films) … , though some of them became blockbusters. Those who know me as a person, know it well that I am not the kind of person who has any regrets in life. I never look back in life. I thank God for being kind to me.

Do you remember the first day of your shoot?
Yes, I do. I was not nervous at all. I have been dancing since my childhood, especially at birthday parties with my brother. I was nervous when I gave my first shot, though.

From a cute girl in Andaz Apna Apna to a bold woman today, how do you keep people loving you so much?
Time has just flown by me. I have genuinely been blessed.

What are your greatest strengths and weaknesses?
My family and friends are my strength and my weakness. I’m nothing without them.

Your father Ravi Tandon is a film producer and director, but that didn’t help you to make an entry in films; how true is that?
I have worked with all the top directors, except my dad (Ravi Tandon). He made amazing films like Zindagi, which is like Baghban. He also did Khuddar, Khel Khel Mein, and he was the first to bring in disco songs. But unfortunately he retired when I was joining, so I didn’t get a chance to work with him.

‘Tu Cheez Badi Hai Mast Mast’ and ‘Tip Tip Barsa Paani’ are still remembered as famous songs of all time. Do you think any actress from today’s generation can do it better than you?
I still have boys coming up to me to tell me that Tip Tip… was the song that helped them go from adolescence to maturity. Although I don’t want to probe into what they mean, I take it as a compliment. I think Parineeti Chopra from today’s generation can do it better than me.

Long back there was a story about your dad gifting you a Ferrari which was like a ‘wish come true’ moment…
My dad is such a great person!

Is there any interesting story of your life which you would like to share with us?
I was not nervous. I was completely in awe of Mr. Bachchan. I had met him before, as he and my dad (director Ravi Tandon) were friends. When he used to see me on sets, he would say, ‘I have seen this girl when she was a kid.’ Before Aks I had done Bade Miyan Chote Miyan, where I played his sister. That was easy. Strangely, during Aks, I didn’t speak to him at all. The confrontational scenes were difficult. So I thought I shouldn’t get friendly, because I would not be able to deliver the dialogues well.

Even after becoming a mother to two kids you never stopped looking hot, what’s
your beauty secret?
One should strive to look good always, but with methods like enhancing their natural beauty by following a good diet. I exercise six days in a week and eat a balanced diet. Also stay away from smoking and drinking and love my beauty sleep. This results in looking fresh. Staying happy and thinking positive are also secrets of my everlasting beauty and dazzling smile.

It is said that in ‘Kuch Kuch Hota Hai’ the role of ‘Tina’ was initially offered to you, but you refused to do it (which was later done by Rani Mukharjee)?
As you know, I had retired for two years. I took a sabbatical. I was always a reluctant actor and was never too ambitious. I refused quite a few big films.

When I decided to restart, Kuch Kuch Hota Hai was offered to me. I didn’t want to restart my career playing the second lead. I didn’t mind doing a male-centric film with a small role and didn’t want an actor junior to me playing the lead role. Karan is a good friend of mine and he understood me completely.

Despite attaining popularity, your main successful period evolved in the early 2000s, when you ventured into more serious roles and turned towards art house and parallel cinema. Your comment?
After so many years in the film industry, you get tired of the same roles which require you to do the same old stuff. I want roles with some meat and substance, roles that give me satisfaction. For a change, I am in the news for my work, good work and nothing else. It is different working in off-beat films, especially when you know you have a lot to offer.

Is there any shock bomb coming up this year like your Aam Hindustani & Mohabbat Buri Bimari from Bombay Velvet?
Aam Hindustani track has a retro touch and Mohabbat Buri Bimari is a love song that will make your groove to its beats. The music and songs of the film are composed keeping in mind the Jazz era of the 60′s. I have done it for fun and only because I love the film and the music of Bombay Velvet! I enjoyed shooting for my part.

Is there any message that you would like to give your fans and our readers ?
I am just truly grateful. My fans made me something special. They have supported me through all the time. I am nothing without my fans. I wish the magazine just keeps getting exclusive news to readers. All the best, team Bollywood Town.