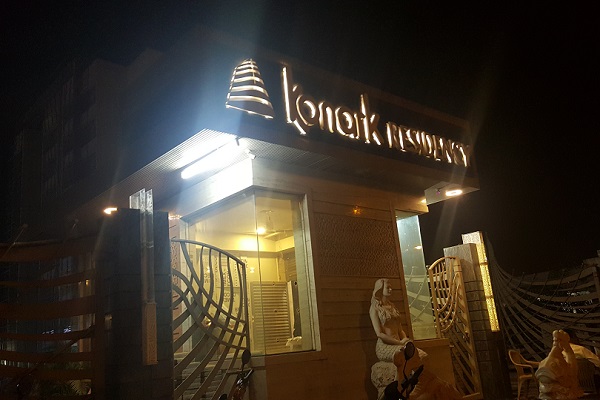 UNSCRUPULOUS developers, politicians and municipal authorities in Ulhasnagar are making the most of the pathetic regulatory situation in the Sindhi-speaking city. Believe it or not, here Konark builder has constructed its Konark Residency project on the basis of only a power of attorney.

On January 23, 2016, ABI (abinet.org) published an article under headline ‘IT HAPPENS ONLY IN ULHASNAGAR: UMC so very kind to Konark builder that it clears files in just five days’. Konark Residency (CTS No-1700, 1701. Plot No-3, 4. Sheet No- 97) is being developed near Shahad railway station, Ulhasnagar-1. Documents available with ABI show the project is 100 per cent illegal.

The plot used to have a factory on it, M/s Eastern Machinery and Trading (EMT) Company owned by Bhagwandas Satramdas Tolani that was spread over 14,957.25 square metres. The EMT Company was also embroiled in a controversy as the enforcement directorate (ED) had booked company owner Tolani for violation of the Foreign Exchange Regulation Act (FERA), 1973.

According to documents, on January 17, 2000, Bhagwandas Tolani gave development rights for the plot through ‘power of attorney’ to a person, Kishore Kakumal Keswani, proprietor of M/s Hare Krishna Realtors having partnership with someone called Dalbirpal Saini. It needs to be noted that the said power of attorney was prepared in Mumbai and not in Ulhasnagar, and that it was only on Rs 50 stamp paper.

Keswani, a bad name in the chemical business and a land encroacher, is also an expert in preparing bogus documents. His name is terror for city businessmen. On the basis of the power of attorney, in 2002 Keswani submitted a plan in the Ulhasnagar Municipal Corporation (UMC) to seek construction of a building on the said plot. It needs to be noted that the plot was at the time meant for industrial purposes but without changing the nature of use the UMC approved the plan for ‘G+2’ (ground plus two).

Keswani started work. Construction went on till the plinth level and Keswani tried to vacate the jhopadis (huts) near the company plot. Keswani used private goons to remove the jhopadis. The construction was stopped as a Muslim woman (name withheld by ABI) set herself on fire after being tortured by Keswani’s goons. The police registered an FIR against Keswani in the matter.

In 2004, suddenly a third person, Kumar Ailani, entered the business. Ailani started bookings for the construction at a rate of Rs 860 per square feet, but on a visiting card. Ailani booked 20 to 25 flats. But booking was stopped after heavy rainfall on July 26, 2005. Ailani is a well-known businessman-cum-politician. He was a councillor, deputy mayor and also MLA from BJP.

Later in 2007, Keswani applied for revision of plan and on February 28, 2007, even got approved it. In the documentation the UMC accepted that some parts were residential and some industrial but still approved the plan. As if by chance, the state government changed the nature of land use from industrial to residential-cum-commercial in 2012.

On February 22, 2013, Keswani again applied for revision of the plan through architect Manish Chawala. On April 4, 2013, the UMC revised the plan and issued Commencement Certificate, instructing that a few formalities be followed by Keswani.

Shockingly, a new company called M/s Konark Nirman Pvt Ltd started construction on the property. Konark claims there was a joint venture agreement on May 5, 2013, between Keswani and Konark. Since then M/s Konark Nirman Pvt Ltd is developing the plot violating all rules and regulations. Every stage of illegal construction is done in connivance with municipal officials, a result of corruption and collusion or lack of vigilance on the part of the UMC authorities.

The UMC says it did not know about these happenings so far. “The matter just came to my knowledge. I will check. I will revert to you soon,” said Yuvraj Bhadane, spokesperson, UMC.

Mera Bharat Mahan……..Law is an ASS in our country.

Harassing poor and comparative to goons and big shots is what UMC means and 99% are corrupted on UMC you may say extortionist’s for common man and loyalists for builders and corporators.

That’s called post mortem.
This was a real need of the hour.
Thanks for blasting this nexus of corruption and malpractice.

Umc is made for these konark people only

If the news is genuine, would request you to forward the required documents mentioned in the article. Prove your words.

The whole ulhasnagar is illegal.
80% of houses/building/plots done have proper documents as state govt has issued them.
There is no TP no mla support no management.
Rest whatever new construction comes up is only coz umc is supporting as they get cash for it.
40% of Mumbai’s garments business is from ulhasnagar.
Its a suburb where a person living in chawl is millionaire but never comes in front.
Every thing is possible in ulhasnagar.

Its totally a 100 % legal project, built with all requisite permissions, sanctioned and approved by major banks. Its a huge conspiracy by competitors to defame the company seeing the excellent booking response it received on launch. Please do not believe in rumors as I personally know 7-8 customers who are booked flats after getting legal advice from their personal advocates stating the fact that all documents are up to date and they could go ahead.

Totally fake news no proof at all

i m regular reader of ABI. I claims ABI news is 100 percent.correct & i also claims Konark is 100 percent corrupt company. In future all directors of companies will be behind bars.

It seems blackmailers news. Banks are sanctioning loan on verification of documents. Alert sindhis from them

Just prove authenticity of your wordings

Excellent Job done by ABI..!!!
All corrupt officials will be in radar now..If anyone has issue with authenticity of news pls get cross check with UMC instead of asking ABI.

People will bark and say anything … It Proves your way of taking things … Dont b follower have proof than show and bark ..