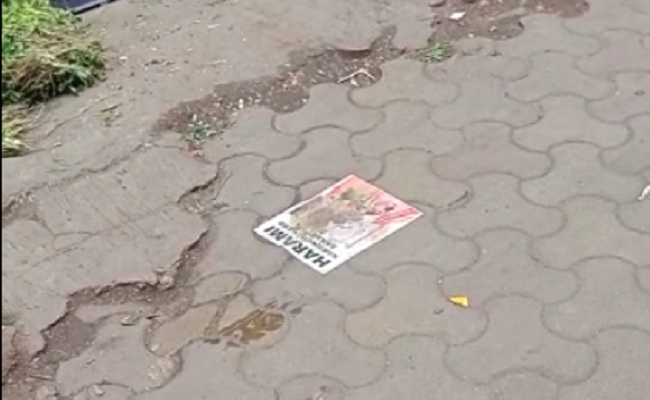 A poster has appeared on a road in Vikhroli, abusing and insulting firebrand Hindutva Saint Yati Narsinghanand Saraswati. As per locals Bajrang Dal and BJP workers, this act was allegedly done by Sadar of Noorani Maszid in Islampura, Suryanagar, Vikroli (West). However as per them, the Parksite police station has shown laxity and ineptitude in this matter and no headway has been made in the investigation. Just an FIR has been filed in this matter, against unknown persons, 10 days back, on 21st April 2021.

On April 21, 2021, Parksite police registered a FIR (No-193/2021) under sections 295 (A) and 505 (2) of IPC against unknown persons on complaint of Pankaj Lad. Yati Narsinghanand Saraswati is Mahant of Shiv Shakti Peeth temple at Dasna, Ghaziabad in Uttar Pradesh.

Pankaj Lad, a lawyer by profession and conveynor of Bajrang Dal for Vikroli district and a local BJP worker Sudhir Singh, were informed that a poster abusing Yati Narsinghanand Saraswati has been pasted on road near Maszid at Islampura area. Pankaj Lad and Satyendra Singh rushed to Parksite police station and registered the FIR.

It is alleged that the poster had been pasted by miscreants on behest of Raffiq Manna Khan alias Bablu, the Sadar of Noorani Masjid but police registered FIR against unknown persons. Shockingly, Sadar Bablu is allegedly being protected by a influential local Shiv Sena leader as Islampura area is a captive vote bank for that leader.

Mohammad Raffiq Manna Khan is notorious for disturbing communal harmony. He tried to change the name of Shiv Bhole Laghu Udyog Lane to Islampura in past. Then too police had to interfere in the matter and BMC demolished the board which hade WELCOME TO ISLAMPURA” written on it. Mohammad Raffiq Manna Khan is a known criminal and has multiple FIR’s registered against him.

Speaking to ABI Sudhir Singh said that if Parksite police failed to take action on culprits or conducted a fair and impartial investigation, then a protest will be organized soon on a large scale at the police station. “A similar incident has happened in Govandi as well, and immediately the Shivaji Nagar police station at Govandi registered an FIR and arrested the culprits. However the police officers posted at Parksite police station, have taken no action whatsoever, and are trying to protect the accused and scuttle the investigation,” said Sudhir Singh.

It is indeed shameful that in times of a Pandemic, where persons of all castes and faith are coming together to help each other, few miscreants are hell bent on spreading communal hatred and it is even more horrifying that the police at Parksite Police station are protecting those miscreants and doing a dis-service to the society at large.