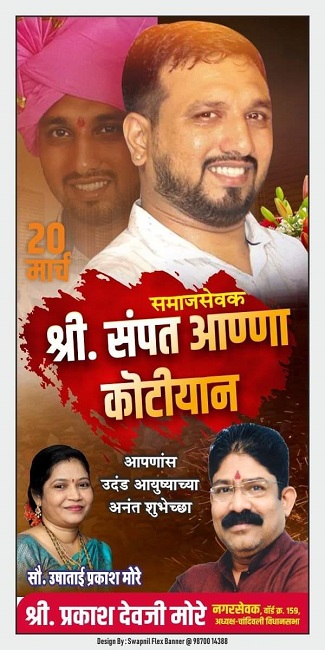 PRAKASH More, a Bharatiya Janata Party (BJP) councillor in Asalafa and President of Chandivali Vidhansabha celebrated the birthday of gangster Sampat Kotian in full swing. All Covid-19 social distancing protocols were blatantly violated, and over 300 persons, including gangsters and BJP workers were present at the scene, in total contravention of current norms in place.

Sampat Kotian is a well known gangster in the area and has a long police record. He is a shooter of Ravi Pujari gang. He was arrested on charge of firing on filmmaker Mahesh Bhatt and had spent four years in jail. One month’s back he was released from jail after being arrested on charge of extortion. He has terrorized the citizens and residents in his area. He runs a cable operating company. On instruction of Joint Commissioner of Police (Law and Order) Sakinaka, police has taken a bond of Rs 50 lakh from him.

Sampat Kotian’s birthday was on 20th March 2021. Shockingly the BJP councillor Prakash More along with his wife Usha More put a hoarding in the area wishing Kotian. Chandivali Vidhansabha Secretary Prashant Mishra and Treasurer Santosh Pathak also put up hoarding in the area wishing Sampat Kotian. Not only this, all of them attended Kotian’s birthday party and danced on film songs. Few of them shared video clips of the party on their Facebook account. Around 300 people participated in the birthday party without fearing Sakinaka Police and COVID-19 rules.

Currently the top officers of Mumbai police and Ministers are fighting like cats and dogs, accusing each other of improper conduct, while gangsters are openly celebrating their birthdays, and have a free reign in the city.

Really need help in sakinaka mumbai. They gundas and there workers are creating too much problems for local citizens. They doing nasha in front of house I can’t describe in word. How to Surviving with family in front of local gunda. I don’t understand why police doing nothing against them. And bjp celebration birthday party with gundas😭