Home Corruption Private entity chops off hundreds of trees few Kms away from the... 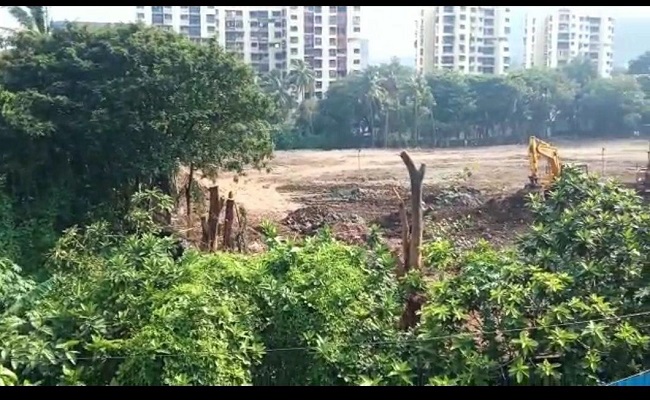 A private company Bright Brothers Ltd has chopped off and uprooted hundreds of full-sized trees at a Prominent plot located at CTS no 112 (PT), at Gandhi Nagar Junction, LBS Marg, Kanjurmarg (West), Mumbai. This Plot is 10 Kms to the controversial Aarey Metro Shed Site, which saw protests on mass scale against chopping off of a few hundred trees for proposed Aarey Metro Site, which definitely constituted as a public welfare project and was a much-needed infrastructure project for a city bursting at its seams.

However, strangely, this time there have been no protests at all on chopping off the trees by a private company, on a plot. This raises several questions on which the Government has decided to maintain a steady silence so far.

Questions must be asked to the so called environmentalists and activists about their glaring absence now. Have they been paid off by the private company? Were they protesting the project at Aarey Metro site only because it suited their Anti-Development Agenda?

Government and BMC must also answer questions as to whether prior permission was taken regarding chopping off the trees and if no, has any action been initiated against the company? If the permission was taken, then how was a private organization granted permission to hack and destroy trees and damage the ecological balance of the plot and its surrounding area? Which department and which authority sanctioned the tree cutting? Were all rules followed in grant of such permission?

Too many questions need to be answered, both by the Government and the Environmentalists. In the meantime, the common man, who was bravely waiting for the Metro to start, now has to wait for a lot longer till the alternate site for Metro Carshed is found. One can’t help but wonder if this Government is against cutting of trees, or was it against the Metro itself? Because if it was against cutting of trees, then allowing a private company to chop off so many trees and not take action against them reeks of political convenience and double standards. It seems like Mumbaikar cannot do much in face of this Government – Private companies – Environmentalists nexus and will have to suffer his fate in silence.

[This issue was bought to our notice by Sudhir Singh, a social worker affiliated with BJP. Sudhir Singh has also complained about this issue to the Mumbai Police as well as BMC but to no avail so far. He now plans to take up this matter with National Green Tribunal (NGT).]