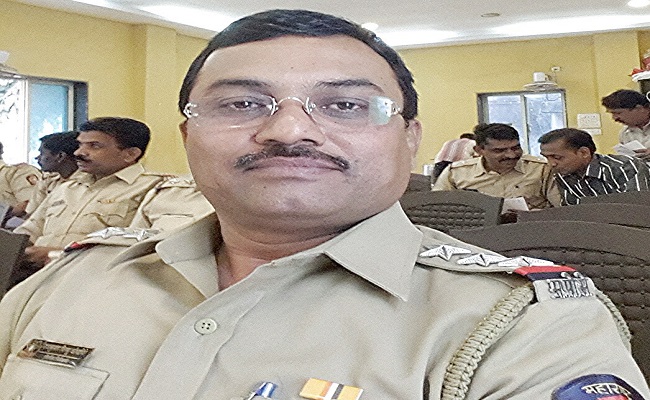 TIME and again we have seen incidents and acts by Inspector Rajkumar Kothmire that proves that he manipulates the cases and investigations and helps the accused after accepting bribes and monetary favours from them. Now a few more such blatant and shocking acts have come to light that once again cast aspersions on the ability of Rajkumar Kothmire’s character as police officer.

In the first incident, it is alleged that Kothmire has demanded a flat from a person Deepak Kothari, accused in a NDPS case. The flat is allegedly worth Rs 2 Crore. Kothmire promised to give Kothari a Positive Say in the court, thereby helping the accused, in exchange of the bribe. In the second incident, Kothmire called builder Mayuresh Raut’s wife to visit him at office, but she refused his order very rudely. In third incident, Kothmire manipulates a case and helped Gold Smuggler Deepak Suhani get anticipatory bail. He also misbehaved with the complainant Anil Satnathi and insulted him.

Rajkumar Kothmire is currently posted at Anti Extortion Cell (AEC), Thane as Senior Police Inspector. The details of the above incidents where he indulged in corrupt practices are detailed as:

The AEC had arrested Mayur Mehta, Romel Vaz, Santosh Pandey and Deepak Kothari under Narcotic Drugs and Psychotropic Substances (NDPS) Act in September 2018. The Tramadol (Hydrochloride) tablets worth Rs 12 lakh were seized from their possession. Deepak Kothari, a builder and mobile shop owner was arrested from Ahmadabad in Gujarat. Listen to audio conversation attached between Siddhartha Kothari (son of Deepak Kothari) and Rajkumar Kothmire in which Kothmire had demanded a flat (worth Rs 2 crore) in Pune in exchange of giving investigating officer’s (IO) positive say in court after which Kothari will get bail easily.

Rajkumar Kothmire called Mayuresh Raut’s wife and asked her to come to his office with Mayuresh. She asked him about the purpose of calling her to his office and Kothmire had no proper answer. Therefore she refused to visit Kothmire at his office, saying “Nahin Aaungi”. Kothmire was helpless. Actually this is the same Mayuresh Raut from whom Rajkumar Kothmire has usurped two branded cars – a Toyota Fortuner and a Mercedes. Fortuner is used by Kothmire himself and Mercedes is being used by an AEC tout (dalal) Samir Bharti. Kothmire was calling Raut at his office to settle the dispute.

On instruction of Bombay High Court Rajkumar Kothmire has investigated and registered an extortion FIR against Ulhasnagar based gold smuggler Deepak Suhani. After registering the FIR Kothmire’s behaviour towards the complainant Anil Satnathi changed drastically. Kothmire insulted, misbehaved and even abused Anil Satnathi. He fully supported Deepak Suhani in getting anticipatory bail in Kalyan and Bombay High Court. Anil Satnathi claimed that Kothmire as an investigation officer was supposed to oppose ABA of Deepak Suhani but he did not appear before the Judge and was standing hidden outside the court chamber. Few staff of AEC also have gone on tour of Bangkok allegedly at Deepak Suhani’s expense.

“Rajkumar Kothmire’s real face has been exposed now. He was acting like a constable not an Inspector. After lockdown I will file a petition to cancel Deepak Suhani’s ABA in Bombay High Court and also urge the court to investigate these charges against Rajkumar Kothmire,” said Anil Satnathi.