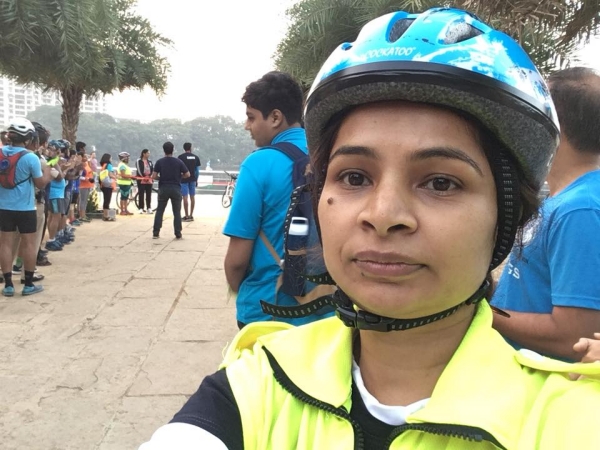 It was 8th March, International Women’s Day, I had an appointment with a very interesting person that evening for my next blog! Excited and thrilled, I was eagerly waiting for her. And then I saw a lady clad in an elegant Tussar silk saree walking towards me with a bunch of roses and a beaming smile on her face! There she was, Cdr Rajeshwari Kori (Retd.), the first Indian woman to have sailed onboard a warship in uniform!

Rajeshwari was a proud Naval kid and spent most of her childhood in Mumbai with her parents and sister, did her schooling from Kendriya Vidyalaya, and went on to do her Bachelors in Commerce before she joined the Indian Navy as a Logistics Officer on 26 August 1995.

Why Navy? Rajeshwari had aspirations to join the IPS after having graduated with a 1st class from Bhonsla Military College in Nashik but life took a new turn when she heard a very distinguished officer, Admiral Awati address the students about what life was like in the Indian Navy, in peace and war. Rajeshwari hence decided what was good for her and applied for Indian Navy. Post selection, she did her orientation training of 45 days with ten other girls at INS Mandovi, Goa and then moved to INS Angre in Mumbai for her first appointment.

Rajeshwari always wanted to do something different, something out of the ordinary, and with a burning desire to serve on a warship, she wrote to the Headquarters asking for an afloat appointment in April 1997. Soon an offer came her way to serve as LOGO onboard INS Jyoti and she grabbed the opportunity. She knew this could be a traumatic experience, maybe even a culture shock, but she confidently reported onboard INS Jyoti on 31 July 1997, a ship with a complement of 25 officers and 130 sailors, all males. Initially she did face the hesitancy of males to accept a lone woman onboard. She had a cabin and a separate toilet to herself. The only other woman on onboard when the ship was at sea, was Surgeon Commander Vinita Tomar. She performed all her other duties onboard with the other officers and sailors shoulder to shoulder. Rajeshwari served onboard INS Jyoti from July 1997 to November 1998 and got the opportunity to sail to various countries like Singapore, Philippines and Sri Lanka during her tenure.

After a successful afloat tenure, she did various other logistics appointments in Navy and retired after 13years of service on 31 Dec 2008. She joined Apollo Tyres as a logistics specialist later and excelled in the corporate world as well. She, till date has very good relations with the Kanwars (owners of the company).

After spending a year at Apollo Tyres, Rajeshwari wanted to engage herself in a job through which she could continue to serve the nation and the society, she applied for the post of Deputy Controller for Disaster Management and joined the Government of Maharashtra on 25 June 2010. Today, her job is to make people aware of disaster management, a subject not very easily understood by the people in India. She was sent on deputation to Germany for Master Trainer in Civil Defence course in December 2012 and attended the International Visitors Trainer programme in disaster management in US, later in April 2015. She says, “just as US has a 9/11, we have a 26/11,
and we certainly don’t want a 26/11 again”! “Chabees gyarah nahi dobara” is her motto for Civil Defence organisation

There’s never a dull moment in Rajeshwari’s life and her desire to try new things in life has still not ceased. She recently took up cycling and was a part of the Saksham Cyclothon aiming at popularising the “cycle to work” culture for a pollution free Mumbai.

For Rajeshwari, her family is her world! Her husband, Cdr Sandeep Kumar, a retired naval officer is currently working as Senior Surveyor at Indian Registrar of Shipping while her daughters Divya and Aditi are studying at Bombay Scottish School.

As she told me about her experiences, I could see in her eyes, the joy of having lived a life full of wonderful memories, who knows the best is yet to come! It was a pleasure meeting a woman who fearlessly pursued what she wanted all her life and continues to do so!

You are an inspiration to many!! May you find success and glory in all your future ventures! Cheers to dreams, aspirations and womanhood!