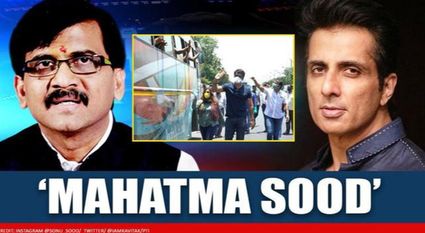 SHIV Sena leader Sanjay Raut on Sunday in his ‘Saamna’ Editorial appeared to hit out at Bollywood actor Sonu Sood over his helping the migrant workers. Targeting the praise that the actor has been receiving for his act, Raut wrote that during the lockdown period, a new “Mahatma” named Sonu Sood has come all of a sudden. He wrote, “It is being said that Sonu Sood transported millions of migrant laborers to his home in other states,” and the Governor of Maharashtra has also praised “Mahatma Sood” for his work.

According to Raut, this suggests that nothing is being done by the state governments and the Central government, which is in itself somewhat odd seeing as it is Shiv Sena supremo Uddhav Thackeray who is currently the CM of Maharashtra. In the editorial, Raut questioned the Bollywood actor as to where is he getting the buses from during the lockdown period. He also questioned that “When the states are not allowing to take any migrant workers, where are the migrants going?” Launching a further attack, Raut wrote that the Bollywood actor “may soon meet Prime Minister Narendra Modi and become the celebrity manager of Mumbai.”

Meanwhile, earlier last week, Sood met Maharashtra Governor Bhagat Singh Koshyari at Raj Bhavan to discuss about his work to help migrant workers reach their home states and provide them food. The Governor applauded Sonu Sood for his work and assured him complete support in his endeavors.

Bollywood actor Sonu Sood and his friend Neeti Goel have won hearts with their ‘Ghar Bhejo’ initiative. The actor has facilitated several buses for workers stuck in Mumbai due to the coronavirus-forced nationwide lockdown. The actor has transported workers to far off states such as Karnataka, Bihar, Jharkhand, and Uttar Pradesh. He has also launched a toll-free helpline to help migrants reach their homes, and as a result, has become somewhat of a social media phenomenon, with netizens likening him to a sort of logistics powerhouse, asking him to ‘send things from one place to another.’

At this point, Maharashtra is the state worst-hit by Covid by some distance, accounting for 82,968 of India’s 246,628 total cases.