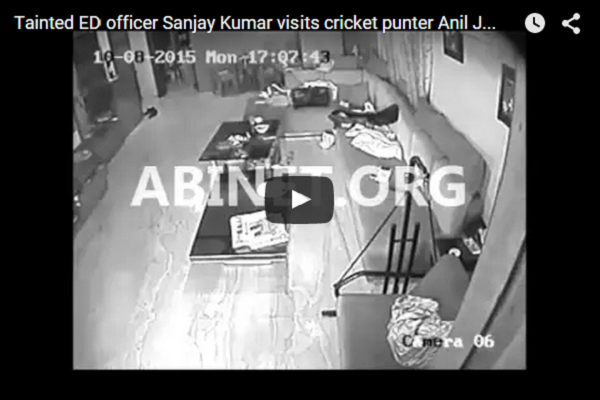 EVEN as the bribe controversy surrounding Enforcement Directorate (ED) Joint Director J P Singh is still fresh, ED Additional Director Sanjay Kumar has also landed in the eye of a storm. Transferred outside Gujarat last week, Sanjay Kumar is learnt to have once paid an unofficial visit to Ulhasnagar-based cricket punter Anil B. Jaisinghani’s home to remind him of a bribe amount.

Sanjay Kumar also said he wanted to talk to Anil Jaisinghani on the phone and there was nothing to fear as it would be a private conversation. When Karishma said her husband had been on the run for four months and his phone was never within range ever since he had absconded, Sanjay Kumar asked her to convey a message to him.

It may be recalled that the ED sent five summonses to Anil Jaisinghani, ordering him to present himself at the ED office in Gujarat for the recording of his statement. The last date was on August 11, but Sanjay Kumar appeared at his home a day before, on August 10.

ABI (abinet.org) is in possession of the CCTV footage in which Sanjay Kumar is seen visiting Anil Jaisinghani’s home.

J P Singh also met Anil Jaisinghani’s son Akshaan in his cabin. Sources said J P Singh agreed to meet Akshaan as he was a minor. He asked him to apply in writing for a meeting. Anil Jaisinghani submitted an application (copy available with ABI), which J P Singh approved. On June 23, Akshaan Jaisinghani visited the ED office in Gujarat with his uncle Hero Kewalramani. Hero Kewalramani was asked to wait outside and Akshaan was allowed to go in. Before he could go in, Akshaan was asked by ED officials to remove his shoes, socks, belt and mobile phone.

According to Akshaan, J P Singh wrote ‘10’ on a blank piece of paper and asked him to convey his message to his father, Anil Jaisinghani. Akshaan, who is only 14 years old, asked J P Singh that his Papa would give him Rs 20 lakh instead of Rs 10 lakh but he should not be harassed. J P Singh got a little angry over this and mocked him for being “such a kid”, saying he was talking in crores and not in lakhs.

The Central Bureau of Investigation (CBI) questioned J P Singh after searches were conducted on his premises last week. Singh is a 2000 batch Indian Revenue Service (IRS) officer of the Customs and Excise wing and is posted as joint director in the ED Ahmedabad branch.

A case was registered under the provisions for criminal conspiracy in the Indian Penal Code and under the Prevention of Corruption Act against Singh and some officials of the ED.

ED chief and IPS officer Karnal Singh has asked J P Singh to “proceed on leave” with immediate effect. He has been replaced by Additional Director, West Zone, Virendra Ojha. According to sources, Singh is likely to be sent back to his parent cadre in the central Customs and Excise. Sanjay Kumar and an officer, P S Srinivas, have been transferred outside Gujarat.

It has been alleged that certain ED officers demanded and accepted huge illegal gratification from the accused and suspects in the said cases.