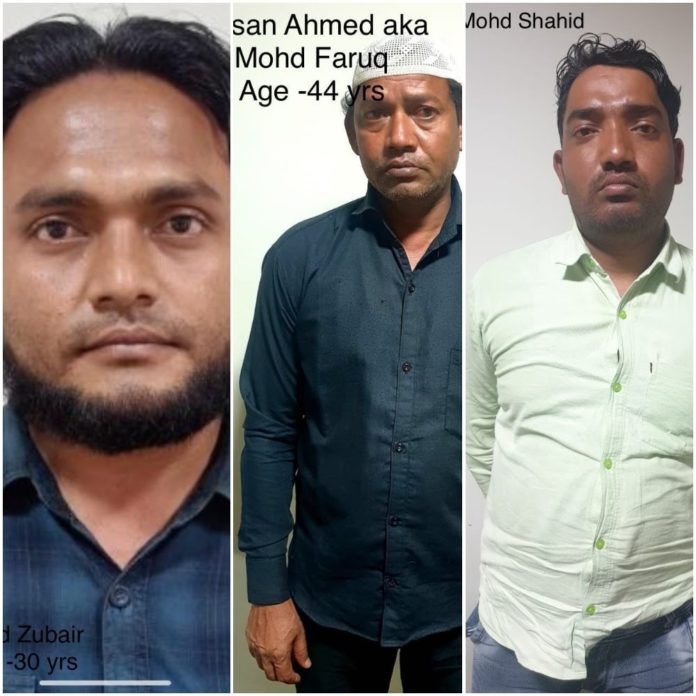 Uttar Pradesh ATS has arrested three Rohingya Muslims who were living in India on forged documents. Arrested from Unnao, Aligarh and Noida on the basis of input from the Lucknow-based Military Intelligence (MI) unit, the three men were facilitating others from Bangladesh and Myanmar to acquire similar documents and settle down in India.

The MI unit had received information in 2019 about a group of Rohingya Muslims, who had settled down in various parts of the country after illegally acquiring Indian identification documents.
Officials also had reason to believe that members of this group were actively involved in bringing other Rohingya Muslims from Myanmar and Bangladesh to India. They were also helping these people secure low-waged jobs in slaughterhouses and beef units.
Upon investigation, the Lucknow-based Military Intelligence landed on the trail of a suspect identified as Mohd Faruq. Myanmarese documents later revealed later that Faruq’s real name was Hasan Ahmed (44) and he had fled Myanmar.

Arrested from Noida, Unnao and Aligarh

After working at a slaughterhouse in Aligarh, Hasan Ahmed moved to Unnao, then to Rajasthan and finally settled down in Haryana’s Nuh. He lived with his younger brother Mohd Shahid in Unnao, officials revealed adding that Hasan Ahmed was aided by his son-in-law Mohd Zubair (30), a resident of Aligarh.

This matter was first brought to the attention of UP ATS (Anti-Terrorist Squad) in 2021, leading to a joint operation. After monitoring their movements for a month, the UP ATS arrested Hasan Ahmed, Mohd Shahid and Mohd Zubair from Noida, Unnao and Aligarh, respectively.