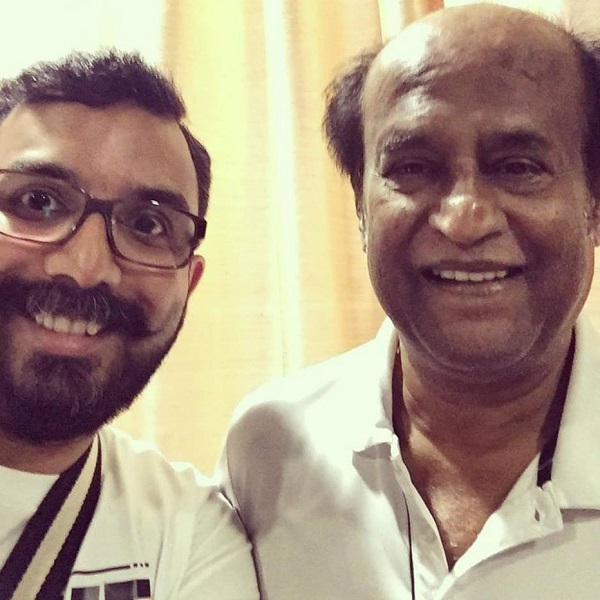 PATHMAN Senathirajah, the owner and director of the V-group of companies wanted by the Mumbai police in the QNet fraud, was spotted taking a selfie with South Indian superstar Rajnikant. On February 5 around 7pm Pathman posted a picture on Facebook taking a selfie with Rajnikant. As Rajnikant is a superstar from the cinema worls, the selfie went viral. According to reports, at present Rajnikant is in Malaysia for the shooting of his movie Kabaaali. Rajnikant is not involved in any scam but QNet members are using his pictures everywhere.

Pathman Senathirajah is a Malaysia-born businessperson. A lawyer by profession, he started his network marketing career with the direct-selling company QNet in the late 90s. He is now a V-Partner and also heads the ‘V’ as it’s Managing Director. He is wanted by economic offences wing (EOW) of the Mumbai police.

QNet, the controversial Hong Kong-based multi-level marketing (MLM) operator with multiple names (GoldQuest, QuestNet, QNet, QI Ltd and QI group are the better-known names) has finally come under the radar of Mumbai police. Police have registered an FIR against QNet, for allegedly duping thousands of investors by selling them plastic and glass products terming them miraculous objects for treating severe diseases like cancer.

The FIR names five accused, including QNet’s Hong Kong-based founder Dato Vijay Eswaran and Senathirajah. In the Chennai QuestNet chargesheet, Sanathirajah’s brother is also an accused and has been declared absconding. More than 31,500 investors have given their statement against QNet in Chennai.

In February 2014, the Enforcement Directorate (ED) registered a case under the prevention of money laundering act (PMLA) against QNet, Vihaan Direct Selling, Ferreira and QNet founder Vijay Eswaran and three other independent representatives (IRs) of the MLM operator.

The EOW had booked several accused including Ferreira and five companies related with QNet, under the MPID Act. Until now, the accused were being investigated for cheating and forgery under the Prize, Chits and Money Circulation Schemes (Banning) Act 1978, and for money laundering by the Enforcement Directorate (ED).

In September 2014, EOW of the Mumbai Police Crime Branch has arrested Susan Chatterjee, the former daughter-in-law of Ferreira in connection with the alleged Qnet scam. Police found around Rs 1.70 crore in her bank account, which were earned by Qnet through its binary scheme.

Big lol to your story. Wait for the regulations to come, then will decide who is fraud.

Bull shut story… Know facts first and then act.
. You media is completely a useless thing in India.

Mr. Anonymous…Till the regulations come in…it is a fraud…If it is so good, why is it not being regulated in India?

do u know more an than forbes magzine, are you bigger than world direct selling associations and who knows more you or world top media channels…..and final thing INTERPOL, are they any fools to tie up with this comoany ??????

Boss….this is completely wrong story. I am in qnet and enjoying! We are registered with Ministry of Corporate Affairs…. Ab Bol!

I think you are one of big chutiya, with no knowledge at all. Go and read increase knowledge chutiya.. ????????

Myself Harikrishnan from India.Am an individual doing business with qnet.you guys are saying that our products cure cancer and all.can you saw any brochure or any article from company showing that ? Even many people stops education in between they stop studying and you guys are telling that to file a case against to return back the college fee.please do that also if you can. Those who work hard can only get succeed.people who are against company are some lazy bums just buy some products and they want to make money just by doing nothing.if they make also you guys… Read more »

Akela bureau of investigation? Please please prove your theory.. we are scared of our QNET. you are the only ray of hope.

Please save us by providing us proper facts of the above article 😀 😀 or, get lost from web :/ you are misleading people!

However, thanks for your free advertisement about Qnet. Love you :*

In india,chain link type business are banned,so in india this business can be termed as fraud.the business regulations in india is different from the rest of the word in many scenarios,first know about it and react,dont compare two dissimilar things and say that one is wrong,u couldn’t say that,so what foreign organisations support them,it doesn’t give a shit,if it doesn’t abode in the path of the rules of government of india.

Qnet - Investigation into their scams, fraud and fraudulent attempts to cover their tracks - Web Activism

Qnet – Investigation into their scams, fraud and fraudulent attempts to cover their tracks – Fraud Ventures

You Morons ..
Have a Look Below Links and Then talk your BullShit Here.

Even The Writer Of this post also Have look all below.