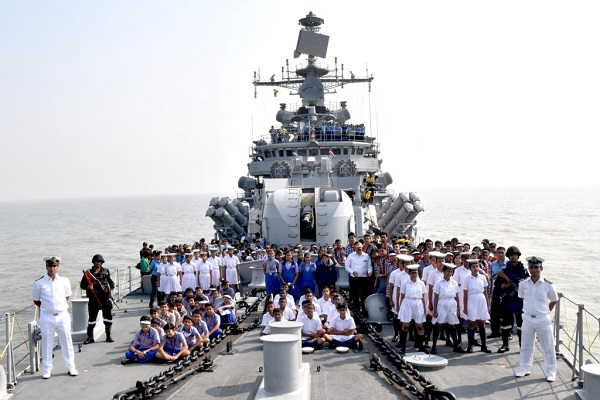 AS a part of Navy Deek celebrations, a day at sea for school children and veterans (including Army & Air Force) was organized by the Indian Navy on 28 Novvenber 2015. The event endeavors to give an opportunity to young school children to be enthralled by the might of our warships, life at sea, and by having the glimpse of various scintillating activities at sea.

This was a unique opportunity for schools to expose their students to India’s Armed Forces. 1188 students from 27 schools from in and around Mumbai and 657 veterans participated in the event. The event included many exercises at sea such as flying operations, force protection measures (FPM), replenishment at sea, marine commando operations, demonstration by missile boat and submarine.

Children and veterans embarked on Indian Naval Ships Viraat , Mysore, Trikand and Deepak. The event also aimed at refreshing the memories of our veteran’s and to expose them to advancements made by our navy in consonance with modern technology.

Navy Day is celebrated every year on December 4 to commemorate the attack on Karachi harbour and the decisive naval victory in 1971 war against Pakistan.