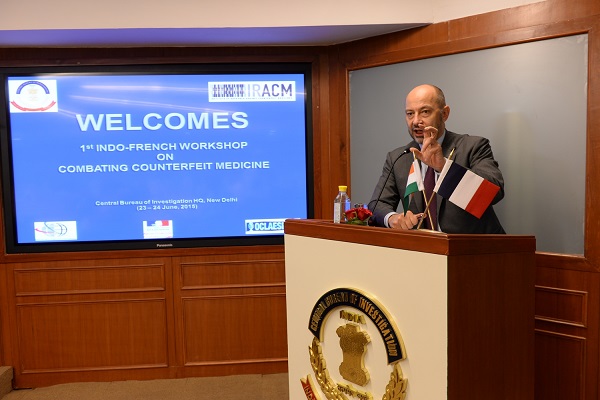 THE First Indo-French workshop on “Combating Counterfeit Medicine” (23-24 June, 2015) for Police Officers, Investigators and other officers, being hosted by the Central Bureau of Investigation was inaugurated by Anil Sinha, Director, CBI in New Delhi.

According to CBI spokesperson, this is a first such workshop of its kind for police officers, investigators and other officers from Law Enforcement agencies being organised in collaboration with the French Embassy; Institute of Research Against Counterfeit Medicines, France; Central Office Against Environmental & Public Health Violations, France and Central Fight Against Harm to the Environment And Public Health (OCLAESP).

Inaugurating the workshop, Director CBI Anil Sinha said that drugs save lives. If the drugs themselves are spurious, nothing can be more dangerous for human life. The problem of counterfeit medicines has assumed alarming proportions and there is an urgent need to fight this growing menace. According to an estimate of INTERPOL, fake medicines kill more people in a year than those who have died in the past 40 years as a result of terrorism. Large amounts of money are involved in these transnational criminal enterprises. For example, one illicit online pharmacy network, which was dismantled by US authorities in 2011, managed to earn USD 55 million during two years of operations. Counterfeiting has become a global problem which now has attracted due attention of people from medical profession, Drug Enforcement Agencies and Law Enforcement Agencies like Customs and Police. Counterfeiters, who run this deadly trade undercover, use sophisticated technologies and tools and are well equipped.

Speaking on the occasion, Director CBI reiterated that any effective action against this activity would require continuous surveillance by the regulators and active co-operation from the Police, Health, Regulatory and Customs officials. International cooperation is another aspect which needs to be addressed due to transnational ramifications of this crime. As designated National Central Bureau of India, CBI is ever willing to assist the agencies of India and abroad in combating transnational crime.

Speaking on the occasion, François Richier, the French Ambassador to India said that the problem of counterfeit medicines has started affecting the day to day lives of citizens and is resulting in major health risk. As it is assuming transnational dimensions, cross border cooperation of law enforcement, the private sector pharma companies, customs, health agencies and most importantly the public is very essential.